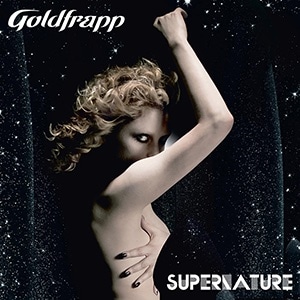 From leftfield idiosyncracy and costumed kitsch, Alison Goldfrapp now finds herself the subject of TV specials, plastered on tube posters and with a Top 5 single, Ooh La La, under her belt. Goldfrapp’s music may be largely the work of enigmatic one-time soundtrack composer Will Gregory, but Alison’s dress sense and Dietrich-like glamour have finally snared the duo some mainstream recognition. Now in the spotlight, third album Supernature is charged with living up to the considerable hype. Does it?

Long-time fans of Goldfrapp could be forgiven for wondering what’s changed since Goldfrapp’s Mercury-nominated 2000 debut Felt Mountain. Back then, their sound treaded a rich, otherworldly territory that was all their own – part trip-hop chillout, part film score. Half of follow-up Black Cherry opted instead for sleazy electro sounds and spawned their first visits to the charts with Twist, Train and Strict Machine.

It is this latter sound that is developed on Supernature, described by Alison as “an electronic, glam cross between Berlin, New York and north-east Somerset”. Felt Mountain fans will find little recognisable as early Goldfrapp here. Indeed, the supreme electropop stomper that is Ooh La La sounds like an evolution – musically and lyrically – of Strict Machine, itself indebted to Spirit In The Sky and Donna Summer.

Less frenetic though equally memorable, Fly Me Away is a dead-cert hit too that best expresses the notion, running right through Supernature, of a wish to escape. Musically, it would make a good companion piece to New Order’s Jetstream, replete as it is with some of the more intelligible lyrics on the album and perfect musical arrangement.

Goldfrapp are not averse to wearing their influences on outlandish sleeves then, as Koko further proves. It sounds like a tribute to Gary Numan’s A.R.E. Friends Electric?, albeit with Alison’s repeated and somewhat uninspired lyrics gracing the big bad synths.

It’s not all dancefloor though. Time Out From The World is one of those lovely soundtrack numbers, full of John Barry-like strings and haunting, yet glamorous, atmospherics – a filet for Felt Mountain fans. But it’s an exception to the prevailing style of Supernature.

One of the record’s most interesting pieces is the big, brash Satin Chic, on which the duo demonstrate their ability to successfully meld cabaret, electronica and pop hooks. Honky-tonk piano fills out a chorus surrounded with electronic noises and more of those borderline meaningless lyrics. It’s a track to stamp stilletos to rather than sing.

Not everything here is a success. Slide In is easy on metaphor and hard on (no pun intended) blunt imagery, while Number 1 is an unfortunate closer that certainly won’t be Number 1. Maybe Goldfrapp know this – it fades out abruptly and the CD immediately stops spinning.

But if the hype was weighing Alison and Will down, Supernature dismisses it with two shakes of a white horse’s tail. It’s a curious, rather than classic, record – with the hooks to make the leap to the mainstream, but with enough residual oddness to maintain Goldfrapp’s air of mystery a while longer.