Goldfrapp – Tales Of Us 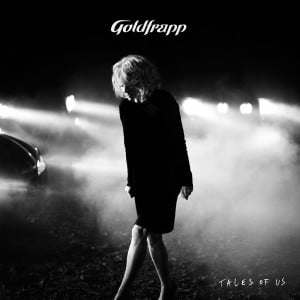 Save for Goldfrapp’s brilliant 2000 debut Felt Mountain, what really sold the duo as a bona fide classic act that will surely retain its place in the legendary canon of English music was their hits collection The Singles. It showed, simply, just how many great songs Goldfrapp have made over the course of their almost 15-year existence.

The duo’s latest record, Tales of Us, is their first since their label Mute regained its independence, and it is at least the equal of Felt Mountain, adding an especially fine group of memorable songs to their collection. It is an album that can be dipped into at will, but its haunting melodies and breathy vocals are better listened to as a cohesive whole – a likely reason why there are to be no official singles released from it.

While The Singles showed how diverse Goldfrapp have been over the course of their career, each of their albums has its own aesthetic. Tales Of Us’s aesthetic is striking; noticeably starker than anything they’ve made before, its orchestral string arrangements nudge up alongside atmospheric, gently played acoustic guitars. Alison Goldfrapp’s voice is given plenty of space in which to seduce. An immediate standout is Drew, which sees those light, airy vocals complementing cinematic orchestral swells to create a romantic, sultry, and atmospheric song that sells Goldfrapp – not for the first time – as ideal candidates to make the next Bond theme song. It is one of five tracks which benefits from its own mini-film video, directed by Goldfrapp’s partner Lisa Gunning, and like all but one of the songs on Tales Of Us its lyrics form a chartacter study.

Another standout track is the beat-led Thea, the only song on this album likely to get toes tapping. It evokes Tales Of Us’s cover art perfectly: an individual standing alone in the dark, the understated music as a soundtrack in his or her own head. Cinematic it may be but it cements them, on a broad, abstract level, in an echelon of artists who aren’t afraid to defy the expectations they have set for themselves, or to experiment and push the boundaries of what’s considered pop. The melodies are instantly memorable, as the best pop music should be, and the execution in the studio first rate. Yet even this track is worlds away from the duo’s past Supernature-era electropop glories.

The homogeneity of Tales Of Us is not only less noticeable and present than on past releases, but when the album does feature similarly paced songs in a row it results in a haunting quality. Annabel is one such track: beautifully creepy, it works as an effective antithesis to the sex appeal of Drew and to the isolating nature of Thea. Ulla is arguably better still, as Alison Goldfrapp’s voice grows gradually more expressive and louder in conjunction with the song’s weepy strings. Eventually, acoustic guitar complements strings that become gradually higher pitched, resulting in an emotional uplift that hasn’t been heard on a Goldfrapp song since A&E.

Whereas Goldfrapp’s classic material featured a certain detached cool, Tales Of Us, as the title might suggest, is more romantic and emotionally plugged in. Underlining this, the lyrics of its tearjerking finale, Clay, were inspired by a letter written by one World War Two soldier about another, his lover; the song deals with real people rather than characters. It makes a powerful case for Goldfrapp operating at the top of their game not only in soundscapes but in lyrics too, finding a stronger voice and knowing how to use it. This is real music, about real people, dealing in real emotion. That it sounds so gorgeously lush too is mere icing on a very rich cake.