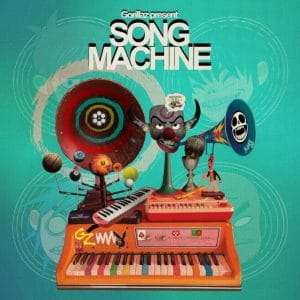 The awfully named, wonderfully inventive project known as the Song Machine began with a mysterious 23-second teaser all the way back in January (when the world was the old normal), and has continued, with a song released every five weeks or so until the final album release. So all of the songs, or at least all of the better ones, are already out there. But presented as an album, with all the tracks hanging together like bananas, is an ideal way to experience them – although this is a compilation, it feels more cohesive than many of the albums Albarn’s lent his seemingly limitless talents to, and it’s certainly better than his last star-studded album under the Gorillaz umbrella, 2017’s Humanz.

The strength of Song Machine lies in Albarn’s keen choice of collaborators. As with the aforementioned Humanz, and 2010’s legendary Plastic Beach, the guests provide the backbone of the album, and allow for Albarn to experiment, mould and reverse-engineer his songwriting to fit the efforts of his collaborators.

Foremost amongst these collaborative efforts are the Robert Smith-featuring title track, with is customarily dark and haunting. The Beck feature, The Valley Of The Pagans, is perfectly silly and strangely endearing. The Pink Phantom, which features both Elton John and 6lack, somehow manages to play to both guests’ strengths without compromising any of the unique Gorillaz magic.

How Far?, which features Skepta, is also a playground for the late Tony Allen – who, over his titanic career, lent his considerable talents to artists ranging from Fela Kuti to via Sébastien Tellier to Charlotte Gainsbourg, and featured on a range of Albarn’s latter-day projects (Rocket Juice & the Moon, The Good, The Bad & The Queen). The greatest drummer of all time? Brian Eno certainly thinks.

The rest of the songs on the collection are also surprisingly great. The first song released from the collection, Momentary Bliss, manages to capture the energy of both collaborators Slowthai and Slaves, while the gorgeously languid Désolé (featuring Fatoumata Diawara) and Aries (featuring Georgia and former New Order bassist Peter Hook) highlight the sheer brilliance of Albarn’s creative vision.

Of all of the guest-heavy Gorillaz albums, this is by some margin the leanest, meanest and grooviest set of the lot – though for unsated appetites a deluxe version, featuring even more guests such as Africa Express alumni Joan As Police Woman and Moonchild Sanelly, is also available). When compared to any of the Gorillaz albums – including their magnum opus, 2005’s Demon Days – Song Machine comes out looking pretty good. Seven albums in, and Gorillaz and their revolving stage of guest stars feel like they’re just getting started. Song Machine, Season Two can’t come soon enough.