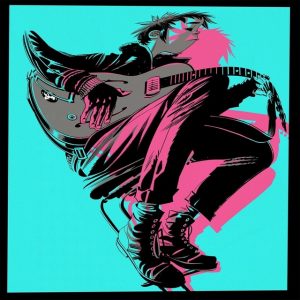 There was a time when Gorillaz seemed like the most exciting thing in pop music. Their self-titled debut and Demon Days spawned singles that became ubiquitous while not quite sounding like anything else, and most of Damon Albarn and Jamie Hewlett’s output since has been an attempt to get the lightning back in the bottle. 2017’s Humanz was an inconsistent release, so full of guests that the band were sidelined and the songs lacked cohesion. With The Now Now Albarn takes the opposite approach, the songs dominated by 2D’s idiosyncratic croon.

Production duties are shared with James Ford of Simian Mobile Disco, and an ’80s funk vibe seeps appealingly through the album. Opening track Humility’s slow groove is complimented by coy rhythm guitar from George Benson, flashy synths and retro drum machine sounds, while Tranz courses along with repeated bass notes and glistening chords. If it is perhaps a little more pedestrian than the sound of the aforementioned older Gorillaz records, it is still well-produced and fun, and Ford performs the same crucial role as Dan The Automator and Danger Mouse once did (as well as Graham Coxon before that – Albarn needs collaborators).

Hollywood is a real highlight, the production flirting with acid house and 2D’s listless drawl (“Hollywood is alright / Hollywood is fragrant”) complementing Jamie Principle and Snoop Dogg’s great verses. A syncopated counterpoint between bass and synth starts the track off with sporadic percussion, before hi-hat and languid chords enter for the chorus. The coda then includes an infectious 303 line slowly modulating through the track, another rhythmic element in a song full of them. It is the only song with guest vocalists and they are well used, an unexpected synergy forming across genres in a way reminiscent of Gorillaz at their best.

The lyrics throughout the album are cryptic and fairly low-key, be it 2D’s run-in with “the King of cool” on Idaho, his worry that “the sentinels will find me and switch me off this time” on Fire Flies or his jaded reaction to the titular Magic City. The apocalyptic ideas of Demon Days and Humanz aren’t as prominent here, replaced by more personal content. Souk Eye is the best example of this, with expressive lyrics about love over 4×4 kickdrums and a backdrop that turns from gentle guitar to intense, disco-tinged synths before ending with a light glockenspiel melody.

The songs aren’t all as memorable as each other, with Sorcererz having nice production but a middling hook and Tranz suffering from a similar problem. Albarn’s lyrics sometimes aren’t the most engaging, but the smooth production stops any tracks from becoming outright duds. Kansas has a nice charm to it, its wah-bass following 2D’s melody line and blissful vocal harmonies entering for the second verse. The song deals with heartbreak in a resigned, stoic way that ends up deeply endearing (“I’m not gonna cry / I got more time to give / I’m not gonna cry / Find another dream”).

The album flows well, with a funky instrumental interlude picking up the pace nicely around the middle and its relatively short run time making it a light and breezy experience. It seems that we have entered a new, more prolific era for Gorillaz – Albarn said last year “if we’re going to do more with Gorillaz we don’t want to wait seven years because, y’know, we’re getting on a bit now” – and with that comes projects that are less bound up in concept than 2010’s Plastic Beach and more pet projects for Albarn. It’s not the same as before, but it still sounds good.