by Ryan Helfand
published: 18 May 2009 in Album Reviews
Tweet 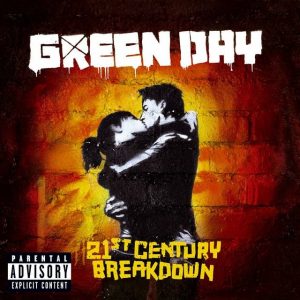 In 2004 our jaws dropped on encountering the formerly immature California trio Green Day‘s seventh album, the unexpectedly grandiose rock opera American Idiot. Does the release of the similarly ambitious and politicized follow-up 21st Century Breakdown upon a post-Bush world continue to surprise?

Ah, the pitfalls of prejudging based on circumstance and expectation. If anything, the fact that a conservative government against which to rail is no longer in power in the USA, as well as the wearing of the shocking novelty of the lovable, punk-rock brats allowing the minute indicator on our players to boldly display the number four and beyond, make this release all the more remarkable.

Green Day no longer have the element of surprise on their side. Whereas American Idiot was, for the most part, preceded by a decade and a half of musical frivolity and shenanigans, 21st Century Breakdown is the latest product from a band that’s already experienced a renaissance of sorts, and serves as a means to further gouge the highly politicised and relatively progressive rock niche well mined by its predecessor and first scratched by Warning, whose title and content do well, in hindsight, to forecast what was to come from the group.

No matter. In its execution and enterprise, 21st Century Breakdown trumps its forerunners. The timing of its release is not entirely indicative of the subject matter, as Green Day avoid focusing the majority of their latest opus on the newly elected Obama government, nor the bevy of problems that continue to plague the country and world. Instead, Green Day have chosen to further substantiate and elaborate on their Bush-era gripes. In addition, they give those complaints some breadth, as the annals of American history are now fair game to underscore the gravity of the failures that befell the country at the beginning of the 21st century.

The bevy of kvetches is put forth during a raucous, exhilarating three act opera, this time starring Christian, the destructive personification of religion, and Gloria, the hero upon which Armstrong pins his hopes for protest and rebellion. The latter is introduced the year after either one of the two George W Bush presidential election victories, with Armstrong imploring her to “weather the storm and” not “look back on last November.”

The specific year is irrelevant, as a variety of calamities from throughout the decade are cited. These range from the economy, the topic broached in the lead, titular single; Hurricane Katrina and the corresponding riots, brought to mind in the first half of the blistering track American Eulogy; and Iraq, noted spectacularly in 21 Guns, which represents a call for the countries of the Coalition Forces to abandon fighting in Iraq and has a sound and the potential for monster success akin to Boulevard Of Broken Dreams.

Musically, 21st Century Breakdown excels where American Idiot was shown to falter. Although the songs continue to hop genres, time signatures, and melodies, sometimes within themselves, nine-minute-plus marathons are no longer invited to the party. Instead, tighter, more succinct tracks do well to provide a thrilling, varied soundtrack, without stumbling into the absurd territory occupied by the brass-based movement of Homecoming, the vastly inferior of the two epics on American Idiot.

Marching alongside the band’s characteristically rousing brand of punk rock, comprised of a particularly effective pack of Armstrong-approved, jackhammer-able power chord sequences, and accompanied by Dirnt’s dynamic bass and Cool’s avalanche of drum rolls and fills, are Elton John-esque piano intros and Queen‘s Bohemian Rhapsody-like ballyhoo. Throw in some subtle string orchestrations, a touch of mariachi and intra-track key modulation, and the result is quite the diverse rally.

More remarkable than the variety and risk-taking pursued by the band are the melodies themselves. While some of American Idiot’s tracks lack substance or veer off course, with those songs simply serving to develop characters and further the plot, there’s scarcely a weak selection to be found this time. Consistently, the group brings the goods, backing the ambitious subject matter with a fine suite of rock songs.

Green Day have done well to earn their big moments – an art they perfected on the previous album’s Jesus Of Suburbia. As reliably exhilarating as this album is, climaxes such as the heavy outro of Before The Lobotomy, Armstrong’s reassertion that he is not, in fact, “fucking around” on the latter part of Horseshoes And Handgrenades, and the striking harmonisation in the second chorus of See The Light all seem designed to cause jaws to drop.

Closing this album of discontent is Armstrong’s statement of intent and desire for the future. In response to all the devastation, he’s committed to pounding “the pavement to take the liars down” and understanding “what’s worth the fight”. It’s a subtle and simple memorandum, ultimately finalised during fade-out by the same two descending chords that open this political punk-rock masterpiece.