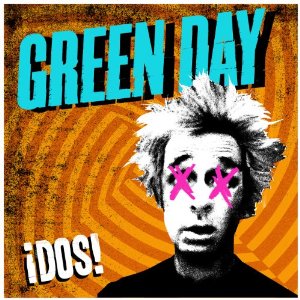 When Green Day mapped out their trilogy of albums, it’s hard to imagine that canceling TV show appearances and all remaining concert dates for 2012 and 2013 to allow Billie Joe Armstrong to go to rehab was part of the plan. While many bemoan the lack of ‘real’ rock stars these days, the truth is, it’s difficult to satisfy fans and promote an album without the lead singer. But Green Day’s ambitious and risky trilogy rolls on regardless, with the release of the second of three parts.

Multi-volume works are always likely to divide opinion, with the consensus being that they are usually patchy and lacking in focus. And ¡Dos! – the follow-up to ¡Uno! – suffers from that exact problem. ¡Uno! received a mixed reception from critics, but there were some genuinely infectious punk-pop songs on the opening part of the trilogy, including Oh Love, Let Yourself Go and Stay The Night. Like its predecessor, ¡Dos! also has a few really strong tracks, but for the most part, it will just leave you feeling indifferent.

The album opens with See You Tonight, which is a rather pointless, minute-long acoustic ballad. It may be perfectly acceptable as album filler on another occasion, but as the song chosen to kick off an album? Not so much. Compared with the adrenaline-filled opener on the band’s last commercial and critically successful album, 2004‘s American Idiot, it really is a disappointment. Another low point is Makeout Party, with awkward lyrics such as: “Do you wanna spin a bottle, play a game of chicken?/ Well, it’s a tongue twister ‘til your lips are bleeding.”

While Green Day make a welcome return to their garage rock days on ¡Dos!, the execution is nowhere near as pleasing as many hoped it would be. Fuck Time is a thrashing, thumping return to the trio’s early 1990s material, but despite the good intentions it just sounds a bit desperate. Lyrics such as: “I want to fuck ya till you’re blue in the face,” come off as juvenile when coming from a frontman who is now 40 years old. Then there’s the crashing drums and all too familiar power chords of Stop When The Red Lights Flash and Wild One. Neither song is particularly bad, they just sound dated.

Yet despite all the misgivings about ¡Dos!, there are moments on the LP of genuine, heartfelt emotion that take on real significance in the light of Armstrong’s recent troubles. The infectious and obvious single Stray Heart soars above everything else on the album, with a Motown-infused bassline and a catchy-as-hell chorus. Other highlights include the compelling Lazy Bones and the bursting pop-punk of Ashley, while album closer Amy – which, as the title suggests, is a moving tribute to Amy Winehouse – also takes on a poignant and darker tone when coming from Armstrong.

Overall, ¡Dos! pretty much lives up to expectations. It’s a mixed bag of an album, which has little direction or focus. Lyrically, it sounds as though Armstrong is calling out for help at times, while there also occasions where he seems content partying his way through life. Whether the lyrics on ¡Dos! should be taken seriously as a reflection of what Green Day’s lead singer was going through during the recording process is debatable, but it’s hard to ignore the underlying issues. However, when it comes down to it, the second part of Green Day’s trilogy of albums is another crushing disappointment. It’s an album from a band trying so hard to be relevant, that even they don’t know where they stand anymore.