Green Day – Father Of All… 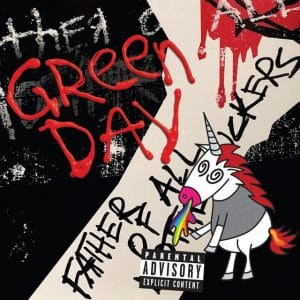 Green Day‘s new album Father Of All… contains a sample of a Joan Jett track originally written by convicted sex offender Gary Glitter. The band pressed ahead, but let fans know that they only did so on the proviso that any royalties generated by the track would be directed towards International Justice Mission and RAINN, two charities that work with victims of sexual offences. So far, so controversial.

Yet as it happens, the album is more of a controversy: Father Of All…, or to give it its full title, Father Of All Motherfuckers, is a disaster. It’s not particularly hard to listen to – it’s not that noble a failure – but it’s just so completely empty, hollowed out like a thrice-fried french fry (and just as tasteless).

The title track sounds like Queens Of The Stone Age with all of the fun and most of the groove removed. Fire Ready Aim follows, and is seemingly bound for the car advertisement circuit. Next you have track that contains the aforementioned controversial sample, Oh Yeah, on which are the lyrics: “Everybody is a star”. Unfortunately (and unsurprisingly) it’s a glammed-up power-pop stomper that actually packs a punch, star or not.

Also unfortunately, every other track sounds like songs by better bands. It’s like Green Day have made a covers album, but want all the money for themselves. Most egregious of all the ‘I’m not paying to use this riff’ tracks is Stab You In The Heart, which seems to owe money to no less than three different songs (Jailhouse Rock, Great Balls Of Fire, Hippy Hippy Shake).

Sugar Youth borrows liberally from their own She’s A Rebel, but forgets to borrow the energy and the attitude. Graffitia goes one better and borrows from two different (and much better) Green Day songs, which should tell you everything you need to know about the effort that went into making this record.

Green Day have become the very thing they once despised: buck-chasin’ mild boys of mayonnaise corporate rock. But at least we still have American Idiot, Dookie, Warning and Nimrod. For those we should be thankful.