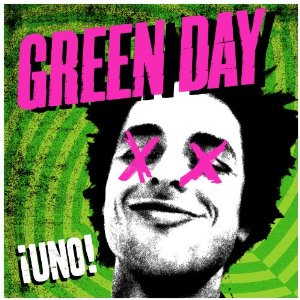 The comeback kids of pop-punk are back. The Bill Clintons of rock, they take the blows and the lows and always manage to rise up stronger, leaving their peers trailing in their wake. Blink 182‘s comeback stalled with uninspiring new material. The Offspring are a joke. But with ¡Uno!, Green Day march on via a heady combination of reinvention and straightforward, effective songwriting.

Billie-Joe Armstrong’s recent trip to the substance-abuse clinic on the eve of the album’s release sets yet another test to overcome – but there was a deeper malaise to face, too. American Idiot had brought politics, concepts, ambitions, and stadia into their world, but 21st Century Breakdown was an inferior sequel, more Grease 2 than The Godfather 2. But where that album sounded immense at first then seemed to shrink before your ears, ¡Uno! is a modest record that grows in stature with every listen.

Gone are the Who-style multi-section epics. Gone, for the most part, is the relentless genre-hopping. And best of all, gone are the turgid ballads (Wake Me Up When This Song Ends, and so on). In their place are 11 fizzing, pacey, brief medallions of pop-punk pork – only single Oh Love brings the tempo down, sitting slightly incongruously at the end of the album as if they couldn’t work out where else it would fit. This is a band desperate to prove they still have the energy to light a firecracker under a crowd.

It’s an understandable desire. Billie-Joe is now 40, however youthful he may look, and thoughts of aging and mortality are a recurring theme. The opening line of Stay The Night – “I haven’t got much time, so I’ll get to the point” – neatly sums up the prevailing mood. One track on, and he’s asking “aren’t we all too young to die?” like a more insecure Sham 69 in Carpe Diem. Yet he neatly avoids falling into the trap of self-delusion by taking on a more paternal – if profane – tone (“you’re just a fucking kid, and no-one’s gonna give you a break”) in tracks like the frenetic Angel Blue.

Musically, the album is studded throughout with little gems. Kill The DJ is silly, aiming for Franz Ferdinand indie disco but very nearly hitting Offspring-style cod reggae, but good grief, is it catchy. Conversely, Troublemaker has virtually no chorus to speak of, but between the Hives riff, the Electric Six vocal delivery and sexual ambiguity (“I wouldn’t say I’m straight cos I’m bent out of shape”), a gleefully buzzing guitar solo, and a hint of Elvis Costello to boot, there’s more than enough to compensate. Pop-punk geeks might recognise Rusty James’ intro from Ginger‘s New York City, but its rabble-rousing refrain marks it as the natural song to round off the album. And the actual album closer, Oh Love – sore thumb aside – is worthy of inclusion on account of its towering, Celtic chorus.

Not every tune hits the mark – opening the album with Nuclear Family was a mistake, relying too closely on American Idiot’s sing a line / play a riff / sing a line template, without the melody to match. Loss Of Control doesn’t quite convincingly convey the anger in the lyrics – Let Yourself Go is a far more successful rant, the fucks sprinkled over with carefree abandon like profane confetti. For all the angst, it sounds like a riot.

Critics who have branded the album a return to the Dookie era have missed the mark somewhat. ¡Uno! combines the pace and energy of that era with the cleaner, crisper sound and slicker songwriting of the Nimrod and Warning era. The guitars gleam rather than buzz, and tracks like Fell For You are more Cheap Trick than Buzzcocks.

With no grand statements or stadium moments, ¡Uno! may mark a downturn in the band’s commercial fortunes. These songs are made for clubs, student unions and theatres, not arenas. And it’s all the better for it.