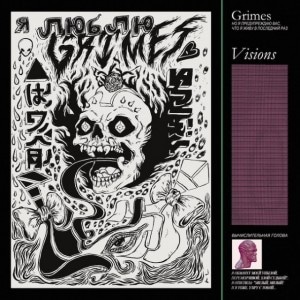 While no record label can be a guarantee of quality, 4AD comes pretty close. Since 1979, the label formed by Ivo Watts-Russell and Peter Kent has been a by-word for quality, boasting names like The Cocteau Twins, Pixies, Bon Iver and tUnE-yArDs.

Grimes are the latest act to join the label. The stage name of Claire Boucher from Montreal, Visions is actually her third album but the first to be released through 4AD – and it’s a tribute to the record’s quality that it immediately sits comfortably next to other, more established, names on their roster.

Visions is, frustratingly enough for a reviewer, one of those albums that’s almost impossible to describe. You could start throwing around adjectives like ethereal, spooky, slinky and eclectic – all of which would be accurate but don’t even begin to scratch the surface. It’s electro-pop but with emotion, arty but accessible: a whole mess of contradictions lie at the huge heart of this record.

Boucher is the polar opposite of the similarly excellent Sleigh Bells – where the New Yorkers take bubblegum pop and then sledgehammer it under a barrage of noise, Boucher’s sound is so light and airy that, at first listen, sometimes the melodies pass you by. But, like her closest comparison, Braids, there’s much to explore and once you connect with Grimes, you’re in for the long haul.

Visions skips effortlessly from piano-driven pop (Genesis), euphoric twinkly dance (Vowels = Space And Time), and atmospheric, Mozart-sampling soundscapes (Nightmusic). Hooking it all together is Boucher’s arresting falsetto, often multi-tracked in the fashion of Juliana Barwick – the opening track, Infinite Love Without Fulfillment, is simply a minute and a half of chopped up vocals over a minimal beat but you’re immediately hooked and intrigued.

There’s a ghostly minimalism at play, recalling the early days of the dubstep of Burial and James Blake, and on others it almost goes bubblegum pop. Be A Body and Vowels = Space & Time sound like pop songs from another planet while even the interludes – so often used as filler – have more depth than you’d expect, with Eight pitching a robotic drone against Boucher’s eerily high vocals to produce something irresistibly hypnotic.

Yet Boucher is at her best on Visions when she lets her human side through. Oblivion gurgles and bubbles away like a lightly simmering geyser, but when Boucher sings that “when you’re running by yourself it’s hard to find someone to hold your hand” it’s impossible not to get a shiver down the spine. Even better is the best track here, Skin, six minutes of yearning beauty, with Boucher’s voice swooping and diving, casting an air of impossible sadness as she laments that “you act like nothing ever happened but it meant the world to me”.

It’s an album to live in and love, to dance to and to wallow in. It may be light years from the lo-fi bedroom recordings that Boucher started from, but it’s also a massive leap forward for her – an album that sits comfortably in the 4AD canon of excellence.