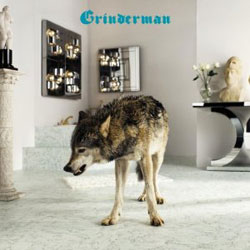 There. You get it? You feel it? Ain’t it fun? Doesn’t it make you feel wrong, but somehow right; powerful, but primordial? You feel that smirk splitting your face? That’s what you’ll feel like when listening to Grinderman 2.

It was great. And it seemed to achieve its goal, for the rowdiness appeared to liberate Nick Cave, and the vicious energy that ran through the next Bad Seeds album (Dig!!! Lazarus, Dig!!!) bore more than a little debt to their leery sidetrack.

But that means that Grinderman 2 feels in danger of having its thunder stolen; and by the protagonists’ main band’s last album. As problemettes go, it’s somewhere between a post-modern philosophical pickle and the plot to Back To The Future 4.

It helps, therefore, that Grinderman has changed. Grinderman Mk 2 is a little (but only a little) less concerned with tucking in his gut and looking for someone/something to fuck, and is a bit more interested in other stuff. Such as wolfmen, abominable snowmen and, musically, big swirling psychedelic shapes.

Hell, he’s even got a girlfriend. A girlfriend who, as we find out on Worm Tamer, calls him as the Loch Ness Monster – “two great big humps and then he’s gone”. So they’ve not lost the wit. Nor the sheer intoxicating blasts of coruscating guitar – the squalling riffs of Evil and Kitchenette could both strip paint.

But when When My Baby Comes trots in on a bongo last seen at a campfire in 1973, Cave rather brokenheartedly remarking that the “best thing about this place is the showers” and backed by Warren Ellis’ rather beautiful violin, it definitely seems like a more evolved creature.

Of course, then it goes batshit crazy as the whole thing breaks into a proper, full-on wig out. Seriously. You see joss-sticks, you see lava-lamps and you see nubile naked hippy girls throwing shapes. It is both hilarious and brilliant; a compliment that could be paid to the entire album. Funny in a way which doesn’t get tired, exciting in a way that belies the fact this is a project which isn’t the day job for four men more than half way towards getting a telegram from the queen.

For what it sets out to do, it’s damn near perfect, and what higher praise is there than that? Actually, wait. That’s not quite true. How about: Grinderman 2 is more fun than Awoooooooooooooooooooooooing at celestial bodies.