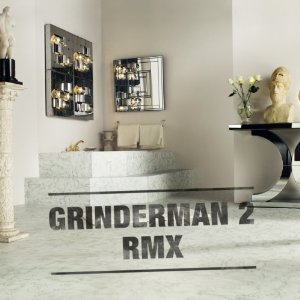 The art – or otherwise – of a good remix album has its key in the balance on that teetering line between the avant-garde and the alienating – the temptation to indulge versus the integrity of the original material. What works in the favour of the ‘RMX’ re-imagining of Grinderman’s second album is that it holds its own as a proper body of work in its own right. For the most part it’s lithe, spirited and possessed of all the vim and grit inherent in Nick Cave and co’s pet side project. Coming in at just under an hour long, the LP feels a lot shorter; a sure sign of the pulsing, frenetic energies running through its veins.

The mixes are tastefully done, always fitting themselves to the foundations of the tracks, and not the other way round. There’s no aimless electronic showboating, just soul-driving rhythms hewn from a kind of rusty, steam-punk aesthetic. The album’s opening 20 minutes are exceptional, from the bluesy kicks of Super Heaven Child to the mechanistic punch of A Place To Bury Strangers’‘ take on Worm Tamer, which ends up sounding like something off Primal Scream‘s XTRMNTR. There’s a clawing, scratching thrust to the first bulk of tracks on RMX that tell of a group whose work ethic and ideals befit a collective far younger than themselves. It’s a world where lines like “I’m only happy when I’m inside her” are slipped out with not a shade of pretence, only a promise that this is one album where nothing is taboo.

Feedback snarls like some keening beast, whipped to the point of desperation and beats collapse into a backdrop of dirt-kissed static. It’s an album of oft-broken limits, a hazy borderline zone of shattered glass and faded dreams. And, as always with Grinderman, it’s sensual in the most dirty and brooding of ways. If it ever feels specifically like a ‘remix’ album, it’s one torn from the bowels of a greasy, liquor stained joint in the underbelly of some ambiguous tortured city.

The languid, gospel-like hymnal overtones of Palaces Of Montezuma are a surprise downtempo treat; a pilled-up ballad spun out of the second summer of love. It’s beautifully incongruous amidst the harshness of so many of the other mixes, but somehow becomes a real highlight, a piece of soulful melodicism that captures all the best nuances of the come-down anthem.

But it’s not all plain sailing, and the adrenaline-engorged thrills of the record’s early moments begin to ebb rapidly with the two remixes of Evil marking out the malaise that affects the album’s latter courses. They’re morbidly overburdened with groaning, strained art-project soundscapes. Horror movie creaks open up as the mixes take a definite turn for the poorer and the album is left gasping for air in a vacuum of its own creation. Amidst this all, SixToes pop up and give When My Baby Comes their standard witch-folk wrapping of bleak-as-charcoal violin strings. The formula doesn’t quite come off as effectively as the mixes they gifted to Depeche Mode back in 2009, but it’s a fitting union of malevolently-imbued sounds; deeply haunting in a way Grinderman have perfected with devilish ease.

To a degree, RMX is imperfect in a way almost all remix albums are; touched with the disparity that can on one hand achieve such greatness, but more often than not pale away into formless experimentation. And where RMX works, it is outstanding, but it is let down by too much flabby excess that for all its artfulness, weighs the album down like a millstone round the neck. But with that said, even among these excesses their remains the ingenuity of Grinderman’s original creations – the album’s progenitor writ large, a shadowy, intoxicating embrace that grips with remarkable tightness.