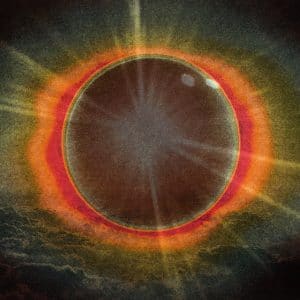 Garlanded by fans and press alike, both Joe DeNardo and Kevin Doria, the Olympia, Washington based musicians who form the core of Growing, had a background playing in harder and louder punk and metal bands, but decided to adopt a different strategy to bore their new music through to your brain.

Choosing embryonic drones that would curiously flare out into scorching unrepentant noise, they built a name for themselves in ambient and experimental circles. Recorded and mixed by the pair and released on Silver Current the psych label which features Howlin Rain, Feral Ohms and Comets On Fire on its roster, Diptych is another sweeping alluvial triumph for the drone inspired duo.

When Growing first appeared on the scene back in 2003 they never used to put credits on the front of their sleeves, so as you were flicking through the racks at your favourite record store, you might have noticed an intriguingly misty pic of swimmers in the sea or some treetops at an angle and felt compelled to investigate. Pulling the release from the shelf, and tilting it to admire the picture, the band’s name would gently emerge from where it had been hidden in plain sight via cleverly understated embossing. That soft visual apparition would be echoed on the lengthy and haunted reverberations that were contained within.

The depthless Variable Speeds, which at 21 minutes takes up the first side of the record, flickers into view in recognisable fashion. Tightly coiled murmurations creak and periodically hiss as the lean and lacquered track begins to stretch out noncommittally. Laced with crude electronic scuffles, it ecstatically sways and whirls sluggishly in a mirage of smoke, choking the air with its impenetrable mass.

In much the same manner Down + Distance, the album’s other side which clocks in at a mere 20 minutes, crawls and putters from the shallows. Chattering columns of bleached organ-like guitar float cautiously by, dispossessed and grandiose, forming a momentary stream of benignly hospitable sound.

No longer clogged with the skyrocketing phosphorescent noise of yore, Growing’s agile and insular sound has permeated into a fugitive multidimensional fog, more muted than clamorous and constantly adrift on the faintest of prayers.