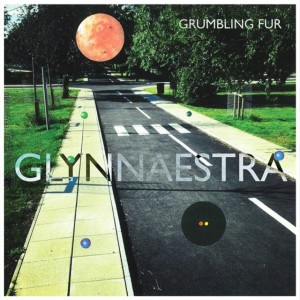 With an album title name like that, the song name on Grumbling Fur’s latest opus would have to be pretty special, and they do not disappoint. They must certainly win an award for Most Impenetrable Track Titles, stemming from the album’s title Glynnaestra, who apparently is an archaic goddess divined by group members Alexander Tucker and Daniel O’Sullivan.

Briskly sashaying around the outer limits of the UK’s experimental underground, these two veterans of bands – including Guapo, Ulver, Aethenor and Imbogodom – offer up Glynnaestra on a silver platter as an avant-pop sound collage.

With such purported lofty ambitions there’s no doubt some severe tongue-in-cheekery going on here, but it’s hard to love pieces that often seem more interested in pleasing themselves than being remotely accessible or tuneful.

The heavily filmic intro piece Ascatudaea, replete with clapper board and film set noises, sets the scene for the album proper to begin, before a brief dark belch of electronic burble and monastic chanting paints the scene for a slice of moody experimental Moog music. Is everybody in? The show’s about to begin.

Protogenesis rolls into life, not quite delivering to the introduction’s level of heavy, instead limply waving its electro tendrils at the spectre of early Depeche Mode b-sides with its twin soaring, yet deadpan vocal melodies and loops talking about “seeing you take eight steps across the floor”. So far, so vague and perplexing. But let’s continue.

Eyoreseye (see what they did there?) continues on from Protogenesis as an overlong introduction that never really moves anywhere, and quite lacks a marked difference in style or content. The allusions to greater works of art and cultural reference points (Blade Runner on The Ballad Of Roy Batty), with lines about “tears in rain” and “attack ships on fire on the shores of Orion” come across as leaden-footed prods at some form of credibility as the music hobbles around a broken off-kilter beat and droned guitars.

Their schtick as shamanistic psychedelicists would mark them as a gentrified MGMT, but there’s a lot more ‘miss’ than ‘hit’ here. Alapana Blaze continues the ‘chimps on percussion’ motif of the previous track for a similar shapeless shuffle as cymbals, glockenspiels, and wooden bricks are looped into a gently wonky distraction. Slight pieces such as Cream Pool and The Hound tease and tweak textures from ‘found sounds’ that Aphex Twin maybe did – while making the tea. Title track Glynnaestra uses cello and guitar drones to similar effect.

But it’s not all dim and glum. Galacticon redeems things with an early Boards Of Canada workout that swells and pulses with melodies peeking out of the drum machine in an enticing manner. Dancing Light similarly uses the pair’s vocals on a rather sweet indie-pop slanted effort that shows the humanity lurking beneath the vapid soundscapes with great relief. Clear Path goes one step further, becoming almost nu-folk Simon and Garfunkel in its acoustic airs and cello magic. Unfortunately after this mini run of tunes the album is brought to a demise with the interminable His Moody Face, which rounds things up with a lengthy sloth of drone and broken beats meandering out of sight.

There are possibilities of ideas, tunes and textures yearning to communicate here, but the paper-thin construction doesn’t stand up to much scrutiny. Yet ultimately, experimenting with instrumentation and the pair’s (albeit limited) vocals do occasionally make for a pleasant, if not completely engaging, listen.