Guillemots – Back To Mine 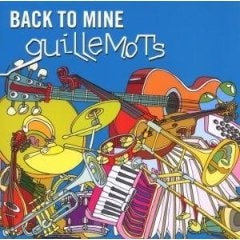 Ok everyone. You know the drill by now. A current fave rave from the airwaves of 6 Music and such like are invited to dig deep and pick a sparkling selection of gems from their download collection.

The final 15 or so tracks are knocked together with the idea that you were back at the band’s hypothetical HQ with the perfect soundtrack to talk nonsense over at 3 in the morning.

This time its the turn of Mercury Prize nominees and OMH chums The Guillemots. And if you’re at all familiar with the work of the versatile London-based quartet, you’re probably expecting a mixed bag. And so it is.

Just like the endless DJ compilations that used to fill up the shelves of Our Price way back in the late 90’s, these comps can shed new light on antiquities by clever juxtapositions, shine a lantern of new-ish artists, and generally make the compiler look really sussed and smart. Apart from the odd dud or two. And once again, so it is.

Not being DJ’s, the Guillemots collection lacks in tempo what it gains in that old favorite, eclecticism.

Their quoted disdain for over-polished production is reflected in the choice of Daniel Johnston Speeding Motorcycle and Sonic Youth‘s Providence, their big art moment ripped from 1989’s Daydream Nation.

Joan As Policewoman‘s superbly laconic The Ride is a welcome inclusion, though a little jarred coming after Four Tet‘s A Joy.

Amon Tobin‘s Reanimator dovetails nicely into Mingus‘ Tensions. Mingus’s troubled piece underscores a similar tension in The Supremes‘ tightly-wound My World Is Empty Without You, La Ross‘ perfectly honeyed pop voice at counterpoint with the desperation keyed into the verses.

Some welcome new introductions, for this writer at least, are the starry-eyed Liars and Brazilian samba supremo Cartola. Liars may have nicked a trick or two from Jason Pierce, but prove there’s still mileage in that staring-into-the-abyss-of-the-universe type shtick

True pay-dirt though is the inclusion of Cartola’s Preciso Me Encotrar, which buzzes along just fine, revealing yet another gold-mine from Brazil after the recent fashion for Tropicalismo. Cartola made his first record at the age of 66, and there’s a lifetime etched into these grooves

Which only shows up the emptiness of Lauren Laverne’s St.Etienne copycats Kenickie, showcasing the usual indie-pop guff about sunshine and moody-girl meets moody-bloke knocked together by off-key singing and an overblown arrangement that hints at the jangly.

All that said, it is my proud duty to report that I Would Fix You does not in any way resemble the mawkism-in-exclesis Coldplay song of nearly the same name.

If there’s a listeners guide you’re looking for, you could do a lot worse than check in with The Guillemots’ lucky dip