Guillemots – Through The Windowpane 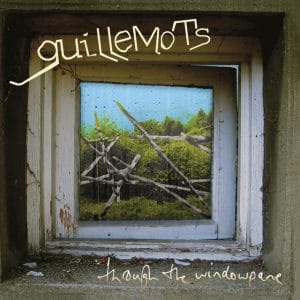 In a world where everything seems closely monitored and controlled by record companies, y’know, nothing should be too long, too quirky, too weird, for it won’t shift and won’t sound good during drive time, it is unbelievably refreshing to see that Guillemots‘ debut album on a major label remains as unhindered a creation as you’re likely to see.

Indeed, on Through The Windowpane, imagination runs riot in a way that is rarely witnessed, or heard, in modern music. Sometimes this leads to a relatively simple, euphoric pop song (Trains To Brazil, Made Up Lovesong #43, Annie, Let’s Not Wait), sometimes it produces a 12 minute composition of several parts (Sao Paulo), and on one occasion, we even get a track with totally unampilifed vocals (Blue Would Still Be Blue). Either way, the songs on offer are all captivating, engrossing and totally enchanting pieces of music that constitute 2006’s finest album to date.

Anyone who has seen them live over the last year will have logged their vast potential and their hinting at something truly special. There, of course, was always a danger that their plethora of ideas and their vast array of unconventional sounds would simply not fit onto a CD, such small objects that they are. But they have achieved just that – Through The Windowpane, somewhat remarkably, does this London based, coastal bird worshipping collective true justice.

Singer Fyfe Dangerfield‘s vulnerable, but quite frankly beautifully tender voice – redolent of Jeff Buckley on Grace – is at the centre of the record, with the songs built around this venerable foundation, none less so than on opener Little Bear, a piece of music showcasing just this, Dangerfield’s fragile tones, in an atmospheric, classical template, full of delicate strings and stark piano. It’s the slowest, most relaxed start to an LP possible, and again, shows this band’s disdain for any sort of commercial benchmarks.

Redwings and If The World Ends are built from much the same mould – swooning, arresting numbers that show off the voice (it just needs to be heard), and some yearning, utterly hopeful lyrics. On the latter, Dangerfield sings “If the world ends, I hope you’re here with me, I think we could laugh just enough not to die in pain,” a line which is as beautiful as it is tear inducing.

The record as a whole is indeed one of immense optimism, one with a mind that turns darkness into light, seeing the best in whatever it comes across. This is particularly evident on the two ‘pop’ singles, Made Up Lovesong #43 and Trains To Brazil, which have, in the months preceding this record, lit up the musical world with their uninhibited exuberance and life affirming messages.

On Lovesong, Dangerfield croons “Now there’s majesty in a burnt out caravan,” suggesting that, contrary to common perceptions, all is not wrong with the world. He continues on Trains, asking “Can’t you live and be thankful you’re here?” – a firm message to the perpetual whiner with a propensity to dampen the mood.

And with records like this, indeed we can – whatever they do choose to sing about, they never fail to hit the right notes, find that heart clenching melody or lyric or simply stagger the listener. There isn’t a duff track to be seen, and you get the feeling the whole thing’s been meticulously planned and orchestrated, with a mindset of giving us a record to cherish, something to put on when the chips are down, and that rare thing, one that will almost certainly be loved in equal measure many years down the line.