by John Murphy
published: 28 May 2021 in Album Reviews
Tweet 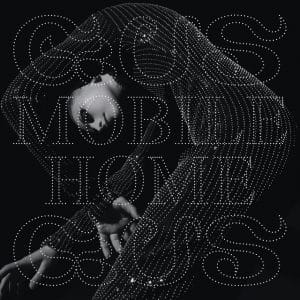 Say ‘Icelandic artists’ to most people and they’ll probably reply with “Björk“. Yet, there’s another group who have become almost as influential as Ms Guðmundsdóttir. The electronic collective GusGus have been active for 26 years now, and Mobile Home is their 11th album.

Their list of collaborators alone sounds like an alternative music’s Hall of Fame – Emilíana Torrini and Hafdís Huld have been members of the band, and John Grant is a regular contributor who shows up again on this record.

There is quite the backstory behind Mobile Home – it’s described as a window into a futuristic dystopian word which has been overtaken by machines. While a concept album about the battle between machine efficiency and hedonistic human pleasure may sound hackneyed, thankfully GusGus know that the most important thing is to keep people dancing.

Anyone familiar with the GusGus sound will know what to expect – there are huge sounding, suitably icy, soundscapes of dark, moody electronica. Higher, which features Margrét Rán Magnúsdóttir from fellow Icelanders Vök, is an early highlight – a pulsating, low-key disco number that builds steadily upwards.

Grant takes guest vocals on the brooding Love Is Alone. Musically it sounds magnificent, with layers of synths built on top of one another to create an impressive wall of sound. Lyrically though, it begins to sound a bit risible, painting the picture of a man just wandering his mobile home on his own, even describing the household appliances (“the spin cycle’s on 90, on an empty drum”).

Original Heartbreak is another downbeat number, but it arrives at the point of the album where it all starts to become a bit monotonous. While earlier tracks like Simple Tuesday had a kick and energy to them, the latter half of Mobile Home starts to feel sluggish.

There are plenty of impressive sounds on Mobile Home, but it’s difficult to really connect with it emotionally. That’s probably the point – it is, after all, supposed to be an album about robots taking over humanity – but the album becomes increasingly similar as it progresses. Not even a song about a battle between good and evil on roller skates (The Rink) stands out – instead, it’s one of the many tracks that all seem to merge together.

Closing track Flush does have a stately, hypnotic beauty which closes the album on a high, but ultimately Mobile Home feels like a bit of a slog to get through, even with just nine tracks. The craftsmanship of the GusGus collective – these days down to core members Biggi Veira, Daníel Ágúst and guests – is as finely honed as ever, but any newcomers may be best advised to explore their early catalogue before this one.