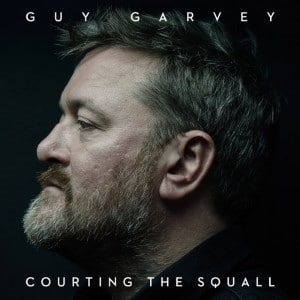 Over six albums, Guy Garvey has seen Elbow grow from doted-on cult champions to Mercury prize-winning, chart-clambering festival perennials, while alienating neither diehard fan nor newcomer. On 2014’s The Take Off And Landing Of Everything, the progressive leanings of their earlier work lost no ground (the prowling King Crimson-esque tenor saxophone of Fly Boy Blue, for instance) to attempts to reproduce the omnipresent One Day Like This.

Now, amid no obvious dip in Elbow’s powers, Garvey brings us his first solo album, and the desire to avoid re-treading ground is pretty clear from the outset: Angela’s Eyes sets a grittily swinging bass and drum part against a snappy jazz guitar that recalls Tom Waits’ sideman Marc Ribot and synthesiser parts that burst through the frugal arrangement as if from nowhere. Clipped and scathing, Guy contrasts beliefs both religious (“Good book but you got no proof,”) and political (“Eton mess you’re a lie made flesh, in a house full of robbers and thieves,”) with his faith in the woman he loves; everything else comes up short.

The balladic, lovelorn title track is more typical, but the unusual, atmospheric instrumentation – plucked harp over rhythmic, shifting bass and drums – is quite distinct from Elbow’s grander arrangements. This simplistic framework sets the tone for much of the album, at its most purely enjoyable when augmented by saxophones and trumpets from Elbow’s brass section.

On Harder Edges, the warm and wistful horns are a smooth counterpoint to the drums’ busy scuffle right up to the final two minutes’ funky fanfare, while the dark, playful Belly Of The Whale is a tight groove up until the bizarre breakdown, where the brass drunkenly quotes George Michael’s Careless Whisper. Another terrific trumpet part is the highlight of Broken Bottles And Chandeliers, adding colour to a meandering strum.

Also striking a more reflective tone, Unwind is a somnolent stroll, overlong but lifted by some layered chords from Garvey, his voice as careworn but optimistic as ever. Juggernaut is far better, a canvas growing steadily from simple, circular melodica and piano upon which Garvey sketches scenes of a love glimpsed “in a winter café window, proper Hopper in the hurry-home gloom,” again bringing Waits to mind through the painting that inspired his Nighthawks At The Diner.

Like Waits, Garvey has a lyrical knack for the romantic but unsentimental, and Electricity illustrates this well. It’s a jazz ballad – very much in the mould of Elvis Costello’s Almost Blue – that imagines a duet over telephone wires (“A million little words go fizzing through the lines, whispers of love and longing”). Sung with Jolie Holland (formerly of country/folk trio The Be Good Tanyas), the gulf between their voices, accents and tones seems to emphasise the distance separating these lonely souls.

It’s a quite lovely moment, and one of the best songs of the set, which ends with the calm and contemplative Three Bells, as serene as the opener is strident, reminiscent of Peter Gabriel (as with recent Elbow albums, Courting The Squall was recorded at Gabriel’s Real World studios) or the later, Talk Talk-inflected albums of Marillion.

As down-to-earth and likeable as its creator, this is an enjoyable collection that mostly avoids the pitfalls of solo albums by members of successful bands that are still very much a going concern. If it turns out to be a one-off digression from the day job, it’s one that’s satisfying and, demonstrating a refined and thoughtful palate, certainly bodes well for Garvey’s stint as director of next year’s Meltdown festival.