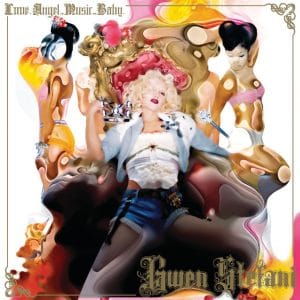 Gwen Stefani imprinted her image so indelibly upon No Doubt that it’s difficult to know what to expect from her first solo album, Love. Angel. Music. Baby. It could have been a continuation of her band’s poppy ska style or she could have done a complete U-turn. Instead, what we have here is an interesting mesh of styles that, while not scaring away No Doubt fans, may persuade people who haven’t been convinced by Stefani in the past to reappraise her.

Opening track What You Waiting For is a rather frantic number which sounds like Stefani talking to herself about the risks of a solo career (“you’ve got your million dollar contract and they’re all waiting for your hot track, what you waiting for?”) and berating herself (“take a chance you stupid ‘ho!”). At first listen it sounds like there’s been too much crammed into three and a half minutes, but it makes for a fine introduction to the album.

There’s a whole range of collaborators here, ranging from Outkast‘s Andre 3000 to Bernard Sumner and Peter Hook of New Order, which displays the sort of respect that Stefani has these days. Eve also pops up to repay Stefani’s contribution to her excellent Let Me Blow Your Mind hit, contributing a rap to Rich Girl, which features Stefani imagining all the Vivienne Westwood and Hollywood mansions she’d buy if she was rich – rather strange for a woman with both No Doubt and hubby Gavin Rossdale‘s royalties to live on.

Cool is a track that will appeal to the millions of casual No Doubt fans who bought Don’t Speak, a heartfelt ballad which holds out an olive branch to an ex-lover. It’s a bit too heavy on the synths but Stefani’s coy delivery of the chorus carries it off. In similar vein is The Real Thing, featuring ex-Prince cohorts Wendy And Lisa together with half of New Order – it’s another poppy ballad which gets away with some cheesy lyrics by being touchingly sincere, making it probably the best track on the album.

Not all of the album is so successful though. Bubble Pop Electric is just bizarre, a manic track which sees Stefani apparently regressing back to her teenage years, promising her beau that she’ll “give you all my love in the back seat” and featuring an embarrassing cameo from Andre 3000 in his Johnny Vulture guise who comes out with banalities like “yo, tell your dad I said hi”.

Harajuku Girls sees Stefani paying tribute to the four Japanese women who seem to be accompanying her everywhere in the promotion for this album and is an interesting, if not altogether successful experiment. The Oriental, almost electro-pop, style of the music works well but is let down by some poor lyrics (“My boyfriend bought me a Hysteric Glamour shirt, they’re hard to find in the States, got me feeling couture”) and a truly cringeworthy moment where one of the said Harajuku Girls comes out with “Gwen Stefani? You like me?”.

Yet Stefani’s willingness to experiment and not just produce No Doubt Take Two is to be commended, and some of the more off-beam tracks work really well. Long Way To Go, featuring another appearance by Andre 3000, is an intelligent song about an interracial relationship (although featuring Martin Luther King samples may be hammering the point home a bit too hard), while The Neptunes spread their usual magic upon the rap-pop hybrid Hollaback Girl.

Love. Angel. Music. Baby. is an enjoyable, if patchy, solo debut from Stefani. It’s a bit too long and, although it’s nice that the UK receives some bonus tracks, they turn out to be remixes of songs already on the album. However, if No Doubt are no more, then this album does just about enough to suggest that we certainly haven’t seen the last of one of the more intriguing women on today’s music scene.