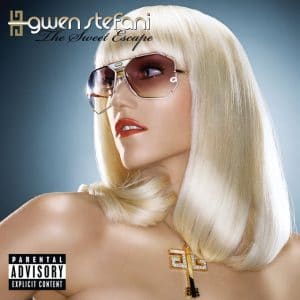 t’s pretty fair to say that you know what you’re going to get from Gwen Stefani. After the success of Love Angel Music Baby, it was always going to be a pretty safe bet that for her second album Stefani would return to the same template.

And so it proves with the release of The Sweet Escape. Stefani has retained the services of uber-producers The Neptunes, carried on with the same ‘throw everything in the kitchen sink’ sonic approach, and the usual role call of collaborators show up: Pharrell Williams, Akon, Linda Perry and, um, the pianist from Keane.

With The Neptunes on board, a Gwen Stefani record is never a dull listen, but as with her solo debut, there are moments that come periously close to crossing that line from ‘quirky and interesting’ to ‘ridiculously irritating’. Nowhere is this more amply demonstrated than on opening track Wind It Up.

Sounding like a reprise of Hollaback Girl but even more annoying, Wind It Up tries to rehabilitate yodelling, possibly for the first time since one hit wonders Edelweiss. Built on a sample from The Lonely Goatherd, The Neptunes lay far too much percussion down while Stefani half-sings, half-raps and then bursts into yodelling. Maybe she’s going for that How Do You Solve A Problem Like Maria audience, but it’s just horrible, and possibly the worst start to an album this year.

Luckily, things quickly improve. The title track links up with Akon and is a lovely, summery bouncy pop song with a very infectious chorus. It starts off very similar to Gnarls Barkley‘s Smiley Faces, and has a similar addictive quality to it. It’s also notable for being one of the tracks where all the effects are given a rest and the song is allowed to stand on its own merits.

It’s a lesson that should be learned throughout the rest of the album. When Stefani plays it straight, such as on the lovelorn ballad 4 In The Morning, she sounds great. Yet when the self-consciously wacky and kitsch side to her personality surfaces, as on the inane Now That You Got It, the temptation is to dive for the ‘off’ switch.

This split personality ultimately flaws the album. One minute there’s Breakin’ Up, an atmospheric dancefloor filler produced by Pharrell Williams, yet the next minute Stefani’s hollering “this is the most craziest shit ever” on Don’t Get It Twisted and coming across like a low-rent Fergie (quite an achievement in itself). Williams also produces one of the other stand-out tracks, the glorious Yummy – even though there is rather a strong resemblance to Kelis‘ Milkshake here.

Keane’s Tim-Rice Oxley also pops up with the rather nice Early Winter, but it does sound like Stefani covering a Keane song. Yet at least the lyrics here are palatable – this has always been one of Stefani’s weakest areas and she doesn’t get any better on this album. Orange County Girl is just cringeable, a ode from Stefani about she’s an ordinary girl living in an extraordinary world, and featuring the line “gonna get myself another Grammy”. Not with this song you’re not Gwen.

Luckily the album does bow out on a high point with the synth-heavy Wonderful Life (featuring guest spots from both Martin Gore and Richard Hawley) and Linda Perry’s songwriting skills help to steer Stefani away from the self-referential babbling so prevalent on other tracks here.

The Sweet Escape isn’t a terrible record (although at times it does get infuriating). The trouble is that in the two years since Love Angel Music Baby she doesn’t seem to have moved on or evolved at all – she’s stood still by the sounds of it, and this comes across not so much as a sequel but rather a remake. Although it’s nice to see she’s dropped the rather creepy obsessions with Japanese girls…