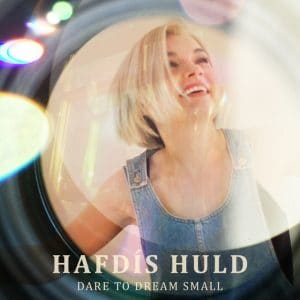 Every now and again, an unheralded album emerges from nowhere to unexpectedly win your heart.  It is fair to say that in a month that also saw new releases from Lana Del Rey, Arcade Fire, Haim and Dizzee Rascal, not too many people were focusing on the latest work of an obscure Icelandic singer-songwriter best known for being a member of Reykjavik electro oddballs Gus Gus at the tender age of 15. Yet with Dare To Dream Small, Hafdís Huld has undoubtedly given us one of the loveliest, freshest records of 2017 to date.

Since leaving Gus Gus in 1999, Huld has had rather a peripatetic creative existence, collaborating with FC Kahuna and Tricky, releasing several solo albums and contributing a memorable acapella version of Sam Brown’s Stop to a 2008 Mercedes Benz advertising campaign, as well as making two feature films and studying at the London Centre of Contemporary Music. With Dare To Dream Small though, she’s brought her sometimes eclectic approach back to basics with a collection of simple acoustic songs that are instantly beguiling.

Working with co-writers including Boo Hewerdine, Nik Kershaw (yes, really) and her partner Alisdair Wright (who also produced the album), Huld’s new compositions are mostly performed on piano and guitar, although several tracks also feature the string quartet that played on the soundtrack of ITV’s Broadchurch. The last lingering traces of Gus Gus electronica have been cast off to create a sound that is warm, organic and alive with uncomplicated melodic beauty. Topping it all off is Huld’s sublime voice, purer than an Icelandic mountain stream and brimming with hope.

This musical mood reflects the theme of contentment that runs through Dare To Dream Small, as Huld herself explains: “Social media can make us feel inadequate, and there is a generation now growing up with the constant pressure to think bigger, get richer, become thinner, and have a more fabulous life. I think it is important to remember that life is not a competition. If you have enough then you should allow yourself to be happy. It’s OK to dream small.”

Whether it’s the happiness to be found in dancing with a lover (the single Take Me Dancing), the process of overcoming adversity to become your true self (Violet) or moving on from loss (Fineshade Forest), Huld’s songs focus on positive outcomes and the importance of perspective. Nowhere is this better encapsulated than on the gorgeously languid Dream Small, which advises that if we follow the advice of the song’s title, we may find what we’re looking for, while “if you have it all/you’re always looking for more.”

But perhaps this album’s greatest strength is its accessibility. There are no weak tracks at all, but some songs have particularly enticing hooks, for example the elegantly spellbinding piano chord changes on Underdog, the impossibly catchy jangle-pop of Last Rays of the Sun and the delicate prettiness of Is It Better. It’s not hard to imagine Dare To Dream Small all over the radio and selling by the shed load, as for all its creator’s idiosyncratic qualities, this is essentially music with a universal message well suited to mainstream appeal. Of course, it almost certainly won’t happen, but that shouldn’t detract one iota from Huld’s impressive, career-high achievement.