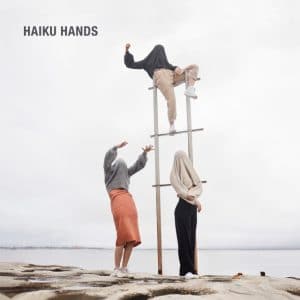 Gender identity is an important focus for Australian electro-pop outfit Haiku Hands, challenging the norms of the female image within popular music. The band’s self-titled debut album has been a few years in the making; some of the tracks were released more than two years ago.

This completed work, put out through Diplo‘s Mad Decent operation, presents itself as a collage of well-crafted segments made of pop music and pop art that coveys a radical message. Compared to their contemporaries, from Charli XCX via Haim to Lizzo, they follow a similar pattern of experimental artists willing to make bold statements with their music. The band take their influence from more than pop music; they reflect wider pop culture – a Warhol-esque world of fame appealing to the Instagram generation.

Opener and first single Not About You is an infectious ice breaker into Haiku Hands’ world. The thumping bass is intense and energetic, throwing us back to the early RnB sounds of the 2000s. The tongue in cheek chorus is a shout out to poisonous ex-lovers and takes aim at the egomaniacal side of self-image appearing on social media. The lyrics in the opening verse reflect this: “I’m going to tear up the lexicon with a hexagon and my sexy thong on/ No matter where your head is gone or take you where your from, I’m going to take you on.”

The beats throughout this album are incredibly infectious, with the danceable throb of Manbitch and Fashion Model Art urging positivity and keeping the good times rolling, despite dance music’s decline in the pandemic.

The album also reflects the rebellious nature of Haiku Hands, throwing two fingers to the male establishment through a sound which is provocative and tantalising, one which sets about establishing them as a new powerful female voice in the era of explicit pop.