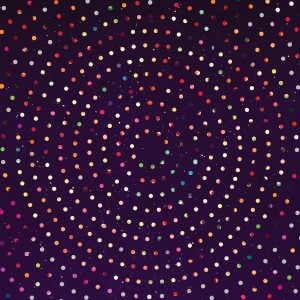 Haiku Salut are not your average band. Their debut in 2013 found them meddling happily in a number of styles, taking an invigorating blend of music old and new to form an unusual instrumental album. This they perfected through an equally unconventional stage show, where tens of vintage lights were illuminated in happy unison, and they further embellished their art with a book of haikus. This band really is one of several dimensions. So how to top all that with Etch And Etch Deep?

The cover gives a strong clue to how the music sounds. It’s as though a small, intimate gathering has been convened under the stars, and while the assembled look to the heavens the trio’s rather wondrous music makes itself known.

When Bleak And Beautiful (All Things) begins it could be just another accomplished electronica act, the rippling piano arpeggios sweet but threatening to sound ubiquitous. Then the accordion comes in and the game changes. From here on the quirky and imaginative sound world the band have created makes itself known, full of slight but utterly charming changes of gear, with light and shade, seriousness and humour, intimacy and tub thumping, all wrapped up in one package.

In this way Haiku Salut bring folk and glitchy electronica into happy union, but ask a number of other forms to tag along for the ride. There is much to enjoy, such as the big drums in Things Were Happening And They Were Strange or You Decide A Particular Algorithm, while the consistently imaginative use of instrumental colour gives the album a sweet closing paragraph in Foreign Pollen.

While the moments of bluster are welcome they are beautifully matched by delicate turns elsewhere. Divided By Surfaces And Silence begins with what sounds like an accordion over crunching snow before a break beat cuts in. Becauselessness is a dreamy, unfocused melody, proving the trio can take their foot off the pedal and allow the music to be less calculated too.

On occasion the trio veer off mid song, and in Things Were Happening we get a bizarre but winsome waltz sequence, the band seemingly able to switch between meters of four and three without a second thought. It is a technique they also achieve in Bleak And Beautiful (All Things), the syncopations just part of the appeal.

You will have gathered from all this that Haiku Salut are forging their own path, their beautifully written and crafted electronica matched by clever use of acoustic instrumental colour and the odd vocalise, resulting in a style that is both unusual and individual. There may be no words, but their music speaks volumes – and is consistently rewarding and charming.