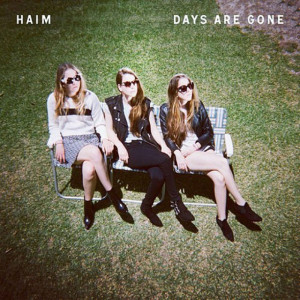 It’s somewhere in the middle of Days Are Gone’s third track (and recent single) The Wire that you realise just how atypical Haim are as a 2013 buzz band. Feted by acts as diverse as The xx and Katy Perry, the Californian band has appeared in endless promo shots which look lifted straight from Hipstamatic while being the name on the lips of taste makers for well over a year.

It’s something of a surprise, then, to hear them sounding like mega-selling country-pop star Shania Twain. Sure, there are far more credible names that could be dropped with regards to The Wire – like much of the album it’s produced by Ariel Rechtshaid, known for his work with Usher and Vampire Weekend, while its stomping country-rock owes much to The Eagles (specifically Heartache Tonight). Nonetheless, the resemblance to Twain’s 1999 smash (and mainstay of hen parties) Man! I Feel Like A Woman! is unavoidable.

This isn’t, of course, necessarily a bad thing, not least because the band clearly shares a massive influence with Twain. The imprint of Fleetwood Mac is clear in most of the album – more specifically, Fleetwood Mac led by Christine McVie, whose frictionless vocals find an echo in main Haim singer Danielle. Further to this, much of Days Are Gone owes a debt to the glossy MOR of McVie’s Tango In The Night singles (of which Everywhere and Little Lies are the most famous).

Still, if the comparison is inescapable it’s also somewhat refreshing in an era where much mainstream pop follows the same deadening EDM template. Haim also escape accusations of imitation by placing a sparse, inventive rhythm at the heart of their music – an influence the band attributes to the r&b influences of acts like TLC and Destiny’s Child. This cross-fertilisation fits neatly with current trends (it certainly explains the adoration of The xx) and undoubtedly played a large part in the hyperbolic reception afforded to Haim’s first single Forever, a sugary rush which rides on clattering percussion and tight harmonies. Several songs here follow the same pattern: the thrilling Falling adds poppy cries of ‘hey!’ and a wall of vocals to strong effect but elsewhere (as on Don’t Save Me) the formula grows stale.

Indeed, while Haim are undeniably appealing in small doses, there is something lacking over the course of a whole album. The tasteful synths and FM choruses run into one another and ultimately feel flat – you could say that the album needs a bit of Stevie Nicks grit to coarsen Danielle’s McVie silk. Certainly when main vocals are handed over to sister Alana on the album’s title track (co-written by Jessie Ware)  the results are inspired, with her more textured voice lending personality to a dance-oriented number which has a main synth line seemingly borrowed from Tom Tom Club. The penultimate Let Me Go is also a standout, beginning starkly before building furiously into a convincingly atmospheric portrayal of an obsessive, almost deranged relationship. Elsewhere, however, the efforts at variation can feel somewhat forced, with the oscillating vocal lines and busy, foreboding backing of My Song 5 sounding like a Fiona Apple tribute act. The shuffling sweetness of Honey & I is enjoyable enough, though it sounds uncannily like Indigo Girls (and causes you to realise that Danielle Haim’s voice is also reminiscent of that band’s Emily Saliers).

Haim’s stock has risen far on the basis of a few singles and an EP. Days Are Gone reveals that these compact formats are the best way to experience the band. Stretched to album length, Haim’s shtick grows repetitive and the music is too frequently solid rather than inspired. There is potential in this power pop, but Haim need to develop further, and may have been ill-served by the hype surrounding them.