Haim – Something To Tell You 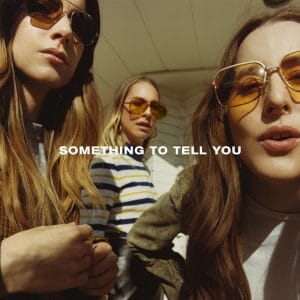 The Haim sisters are back with Something To Tell You, a big, brash, bold pop record which has rather more depth than some might expect.

Anyone looking for proof positive of the ‘difficult second album’ cliché would find Haim ripe for this most unwanted of accolades, given the origins of this album. Following the commercial and critical success of their debut, 2013’s Days Are Gone, sisters Danielle, Este and Alana, together with drummer Dash Hutton, struggled so much with their follow-up that they pulled their 2016 European tour. At the time, Haim released a statement saying they’d reached a critical point in recording and didn’t want to leave the studio.

That seems to have been the right decision as, for the most part, Something To Tell You is well worth listening to. Reunited with producer Ariel Rechtshaid, who has previously worked with artists as varied as Madonna and We Are Scientists, there’s a sense that familiarity was more than helpful to the Los Angeles group during their difficult time.

A cursory glance at the tracklisting reveals what Something To Tell You is all about. The album encapsulates how dysfunctional love is and the effect it has. With songs including titles such as Little of Your Love, You Never Knew and Kept Me Crying, the subject matter is decidedly on the nose. There are tracks about exes, one night stands, new love, and returning to previous partners. Given the raw nature associated with such emotions, it’s perhaps not surprising that Haim’s new work can be a little, presumably intentionally, erratic in places.

It kicks off with Want You Back, which has that quintessential Californian pop sound now well associated with Haim’s first record, underpinned by that habit they have of mixing Fleetwood Mac and Shania Twain, most clearly heard on the rather country sounding Nothing’s Wrong. They really push during Ready For You, increasing the tempo and wandering from the Haim comfort zone. It gives Alana and Este an opportunity to express their guitar work while laying down the most dancey song on the record. It would be a mistake if they don’t release it as a single. There’s also that ongoing theme of inner conflict through Danielle’s Stevie Nicks-esque vocals, when she sings “Wrong time, right place, I wasn’t ready for you”. It twins nicely with title track in the middle of the record, which enters a confused period with Found It In Silence and Walking Away – the latter of which should not be mistaken for a cover of the Craig David ‘classic’. These, it must be said, are notable low points.

But at a real make-or-break moment, lead single Right Now rescues a record that ultimately deserves to be saved. For anyone who has watched the live video for Right Now, directed by Paul Thomas Anderson, the album version is a slightly different beast. Starting out melancholic, it thrashes into an epic monster of a song, via a slightly self-indulgent voiceover. It would have been the perfect closer, and you do wonder what could be worthy of following it. But then Night So Long kicks in. This slow, wistful track informs the listener of the mistakes we all make when searching for love, and the regrets which inevitably come with it. It’s powerful in its subtlety, and there’s a real sense of sentiment and remorse tinged with an undeniable dose of bitterness. These two closing songs see Haim climb up from whimsical radio-friendly indie to a construct replete with rather more substance.