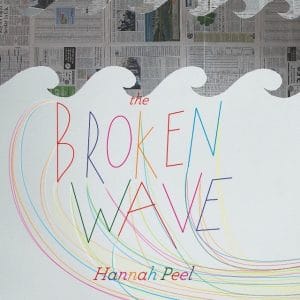 “A very beautiful, honest album, created with, above all, a love for the music.” Not our words, but those of Hannah Peel on her own debut record. And while it might come as something of a shock to hear a new artist describing her work in such assured terms, a listen to The Broken Wave confirms her to be far from arrogant.

Quite the opposite. Her songs have a fragility that makes them the musical equivalent of frosted glass, beautifully crafted but easily shattered if not handled with due care and attention.

This is where the production work of Tunng‘s Mike Lindsay comes in, adding his characteristically inventive and occasionally quirky sonic imprint to proceedings. Not only that, but Nitin Sawhney‘s orchestrations, applied to Don’t Kiss The Broken One and Solitude, are exquisitely realised.

Back to Peel, who has a voice that is endearing and plaintive. There is no window dressing to it, as she candidly sings of falling in and out of love, as well as relatively ordinary day to day events.

Occasionally this finds her tripping over her own words, bringing a breathlessness to the storytelling of Today Is Not So Far Away that is just the right side of annoying. Is This The Start? is more direct in its heady optimism, tapping in to the ‘wiping the slate clean’ approach of New Year resolutions.

Lindsay’s imprints, the icing on the cake, bring the mottled textures of a rickety old piano to Song For The Sea, but he and Peel also know when to draw back, to give her voice the room it needs.

This is, essentially, a folk album, taking the chance to dip in to Peel’s Irish connections. And yet the aspect of folk music that wins through is the one that connects directly with the listener, on their level, with few airs and graces. Because of her ability to do this, and the extra sparkle her voice brings to the songs, Hannah Peel could go far.