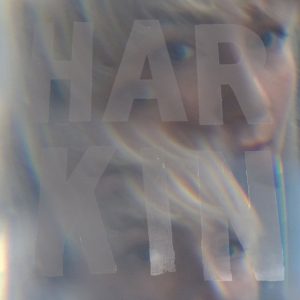 Katie Harkin‘s debut album comes some considerable time into an already impressive career. She spent nearly a decade with her band Sky Larkin and has been a hired hand, lending her talents to Sleater-Kinney, Kurt Vile, Courtney Barnett and Wild Beasts, amongst others. Just reading through her impressive resume over the last few years is somewhat exhausting, so it’s astonishing that she’s actually found the time to record an album of her own work at all.

As might be expected from someone whose career requires them to be on call or on tour, this is an album written and recorded in a number of different locations. Some of it was put together in the UK (Peak District and Sheffield), but also in New York, New Jersey and Los Angeles. This nomadic existence doesn’t seem to have overly affected the sound of the album and it maintains a sense of consistency throughout, although songs such as Nothing The Night Can Change seem influenced lyrically by the place of their gestation.

For the most part, it’s an album of solid indie pop songs that, thanks to Harkin’s habit of writing great guitar hooks and vocal melodies, manage easily to worm their way into your ears. Mist On Glass kicks things off in style with a driving beat, simple guitar lick and the defiant question of “How can you doubt me now?”. Quite why anyone would doubt Katie Harkin is anyone’s guess, but one listen to Mist On Glass (which to these ears alone, possesses some kind of homeopathic dilution of Kids In America in its make up) should cast any misgivings aside immediately.

Nothing The Night Can’t Change, a paean to the North, keeps the tempo up and isn’t afraid to throw a few swells of discordant noise under an earworm of a chorus. Never has post-punk fridge based passion sounded so exciting and danceable. Decade initially bears a passing resemblance to Kings Of Leon‘s appalling Sex On Fire, which might explain the opening line “I know what shame is”. However, rather than developing into a brain dead, bar band singalong, it is unfurls into a touching examination of the highs and lows of relationships. Had she written Decade for someone like Sophie Ellis Bextor (to whom Harkin’s vocals bear a resemblance to, or perhaps it’s vice versa) it could easily be a massive hit. As it is, it’s a gem in an album packed with genuine delights.

There are a few twists and turns that appear at just the right time in the tracklisting, giving it more than a single gear and tone. “You can’t just dial it in” notes Harkin on Dial It In, a slow and dreamy song that relies on its solid bass line to propel a wash of guitar noise. There’s a dichotomy between the sound of the song (barely there and hazy) and Harkin’s insistence on not just going through the motions which plays out nicely as the song progresses.

Red Virginia Creeper takes Harkin further away from straight up guitar, bass and drums as she throws electronic noise, keyboards and feedback into the mix. Initially it feels a little unfocused, primarily because it is at odds with the rest of the album. But once immersed in its curious meditative charms, its experimental depths make it one of the highlights of the record. The closing tracks of New France and Charm And Tedium operate at the other end of the spectrum. More wistful, drifting along rather than driven by percussion, and far more experimental in tone (if not construction), they represent a side of Harkin that requires further exploration. As a straight up songwriter she’s amazing, but on the evidence here, when she really pushes the envelope, something magical will happen.