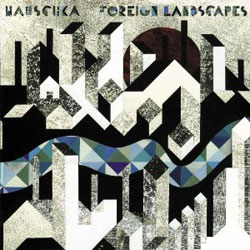 D�sseldorf-based pianist and composer Volker Bertelmann, who records and performs under the Hauschka moniker, has previously been best known for his exploration of “prepared piano”. This technique, as pioneered by John Cage among others, involves modifying parts of the instrument by attaching various objects (paperclips, pieces of paper, even ping pong balls) to the strings to alter and adapt the sound in interesting and experimental ways.

This album sees a further development of Bertelmann’s music from previous album Ferndorf, which itself saw the integration of a string duo into his work. This time round his composed score is performed with the Magik*Magik Orchestra, giving the most expansive sound to his music yet.

There are still tracks in which the piano predominates, notably the gorgeous Early In The Park, whose beauty and simplicity is adorned by nothing save the subtle whirrs, scratches and other semi-mechanical “noises-off” that can be heard throughout the album. Kouseiji, too, (the track titles here seeming to reflect the album name by referencing many different languages and countries) is gentle and elegiac, almost a companion piece to Early…, if much shorter.

Elsewhere though, things are far more orchestral. Instruments conspire with a bustle and busyness on Alexanderplatz, Union Square and Sunny Mission, the plucked staccato strings overlayed with melodious brass and woodwind. Other tracks like Iron Shoes are more sombre, deep and dark, but still multi-layered and textured.

A favourite technique seems to be taking a short sequence of a handful of notes then repeating, building and slightly varying it over and over. The effect can be at times hypnotic, at times enjoyably harmonious (Madeira), or in other pieces like Kamogawa, increasingly rousing and urgent as the music progresses. The closing track Trost features violin playing a one-octave descending scale, which again alters and mutates as it goes on, but here forming a sombre, languorous and often outright dolorous note on which to end the album.

Much better moments can be found on the aforementioned Early In The Park, and Mount Hood: regretful, liquid, cinematic and accessible, all rippling percussion, piano and background creaks. Tunes and arrangements like these are so full of feeling and warmth that they highlight a curious coldness elsewhere. Union Square, for example, sometimes sounds for all its bustle and buzz as if it is hiding a quite empty core.

This is clearly and audibly the work of a musician, composer and performer keen to embrace evolution and the possibilities which that opens up – not only within individual tracks or across a release, but also in terms of his overall body of work. That some measure of intimacy risks being lost with the addition of more layers, instruments and an orchestra is not necessarily in itself a negative – more a payoff, perhaps, for the chance to witness Hauschka’s explorations and development as they unfold.