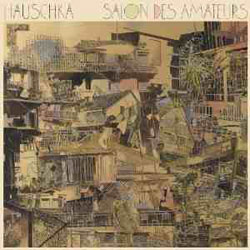 German minimalist techno has its share of fans, but some reviews can flounder at the task of squeezing a fair sized critique from a genre where, by its own definition, nothing much seems to happen. Thesauruses are heavily looted in order to convey the many subtleties and minor shifts in tempo, and generally the experience is exhausting for all concerned. Thankfully Volker Bertelmann (aka Hauschka) has produced a playful and delightful techno homage that goes a long way to transcend the traditional genre conventions.

Named after a piano bar in Düsseldorf where pianist Hauschka regularly curates music festivals, this album is far from an alienating experience. It’s a bold project and its strengths lie in stripped-down simplicity. His skills as a pianist are beyond question and the sounds produced are exciting and satisfying. There is a hidden elegance in the fact that throbbing bass lines are now either curt, sharp tones or playful stabs of plinky-plonk.

The sound is boiled down to a nakedly percussive element that drags modern synths into a more organic realm and it is this driving undercurrent that leaves little room for inertia. Hauschka makes sure things move along at a steady flow, but this is not an album for the impatient – after a while it begins to suffer from the minimalist confines of the source material and at the halfway point there’s little in the way of surprises in store for the casual ear. However, diligent listeners are likely to be rewarded with repeat plays. Those with short attention spans can be consoled by a forthcoming remix project that should see this album reuntied with its original influences.

The sound is reminiscent of the bare bones of Portico Quartet‘s Isla and guest performers include the likes of Calexico‘s Joey Burns and John Convertino amongst others. Over the course of the album we regularly veer between the playful and the vaguely sinister, but everything seems to gel together – much like the blurring of genre distinctions. The jury will be out for a long time while they argue whether this is dance, classical or jazz but they’re sure to deliver a thumbs-up for this far from amateurish collection of tracks.