by Ben Hogwood
published: 30 May 2019 in Album Reviews
Tweet 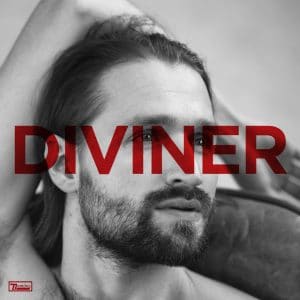 When Wild Beasts announced their amicable split in September 2017, it was perhaps inevitable Hayden Thorpe would be the first of the four to put his head above the parapet and release a solo album.

Yet as has been shown on many occasions, going it alone is a risky business in music. There might be the benefits of artistic freedom and the stage is yours to command – but at the same time it can be a lonely existence, the glare of the spotlight at complete odds with the solitary existence.

However it won’t surprise Wild Beasts fans to learn that Thorpe rises to the occasion with consummate ease. After taking stock to reflect on his time as frontman with the Kendal four piece, he has made an album with close friend Leo Abrahams producing. Abrahams, who has worked with Brian Eno and Jon Hopkins among others, is a name that tends to pop up when good artists need inventive and complementary sonic clothing. He supplies that and much more to Thorpe, yet does so respectfully, Diviner remaining its creator’s intimate secret.

Secrets are the theme of the title track, whose mottled piano line sets the scene beautifully. “I’m a keeper of secrets – pray, do tell,” Thorpe sings persuasively – the first of many occasions where that adverb could be used. His voice is extremely well managed here, not singing from the rooftops as with the earlier Wild Beasts material but carefully placed within intimate surroundings. The listener subconsciously pulls closer to the speaker as a result, or focuses more inwardly on headphones.

This relative restraint actually leads to songs of greater intensity, one of several qualities where comparisons with Talk Talk are extremely favourable. The other is the way in which the songs unwind. The stately Earthly Needs has a poise reminiscent of Mark Hollis at his finest, while the slowly oscillating piano with which Love Crimes starts uncannily evokes the windswept Lake District vistas of Thorpe’s childhood.

Spherical Time, an instrumental towards the end, paints brooding clouds as part of its shaded study, where aural perspectives shift like the fast moving precipitation. Building on this is Anywhen, where the feather light brushes of the hammers on piano strings usher in a song of intricate construction yet clear delivery.

Diviner definitely needs at least three listens to reveal more of its treasures, falling into the ever-disappearing ‘grower’ territory in the way the later Beasts’ material also did. It manages to simultaneously evoke moody Northern landscapes and closed bedrooms – no more so than Earthly Needs, where the physicality of the singer’s voice is exploited. This dual evocation of place is curious given Thorpe is currently based in London.

This is a very carefully thought out new page to Hayden Thorpe’s career, yet the page has freshly written calligraphy on it. There is much to admire and much to relate to, in what is surely just the start of this particular Wild Beast’s solo migration.