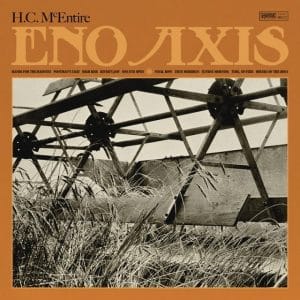 As a solo artist, Mount Moriah’s HC McEntire occupies a fascinating and personal space, working with the tools of a country music tradition while challenging some of its more conservative confines. Her debut album Lionheart opened with an unabashed declaration of queer sexuality (“I have found heaven in a woman’s touch/Come to me now, I’ll make you blush”) and much of Eno Axis grapples with the tensions between the tranquility and beauty of the North Carolina rural environment that inspired it and some of the prejudices it risks preserving (“That Criss Cross flag is flapping in the wind/And the crosses burn”).

On the whole though, Eno Axis (named in honour of the Eno River of North Carolina rather than any possible connection with Brian Eno) focuses on the search, perhaps successful, for an inner balance and stability, and the routine and security offered by American farm life. After an intense touring schedule working with Angel Olsen, this is the environment to which McEntire opted to return. Musically, Eno Axis captures a more malleable and expansive ensemble feel than Lionheart, with subtle but radical sound choices that imbue it with texture and depth. It’s a powerfully atmospheric record, and it brings to mind Red Dirt Girl and Stumble Into Grace, the two wonderful largely self-penned albums Emmylou Harris made with producer and engineer Malcolm Burn.

There is a real sense of an expanding narrative in these songs, many of them beginning in spare arrangements before blooming into lithe grooves or explorations of greater intensity. Some songs are insidious in the best possible way, taking their time to embed themselves firmly in the listener’s mind and revealing fresh layers of detail with repeated encounters. The opening Hands For The Harvest begins with lush vintage keyboard chords and McEntire’s vocals filled with longing and wonder. Later, some pedal steel guitar and drums join to add warmth, and the song seems to gradually bloom. Footman’s Coat, on which McEntire considers paths through life not taken (“In a different time, I’d have taken on your name”) begins with a pulsing drum beat before unexpectedly morphing into a lithe and flexible groove. The richly melodic High Rise, with its gentle undertow of banjo and pedal steel brings to mind the more daring and ethereal sonics Big Thief recently employed on U.F.O.F.

Throughout Eno Axis, there is a deeply subtle and satisfying synergy within the ensemble. Nothing is overstated or overplayed and individual parts are delivered with a care and delicacy which sustains a sense of empathy and warmth. The arrangements are deft and adventurous, but never at the expense of a sense of space and a grounded quality in the music. The primitive drum beat that ushers in River’s Jaw anchors the song in a sense of rock tradition, but other sound choices (especially the depth of the reverb) create something almost spectral and otherworldly. One Eye Open offers less in the way of rhythm but more gently persuasive, enveloping textures. There is both a sense of earthiness and a sense of spirituality – but perhaps these two approaches complement rather than pull against each other.

McEntire has now made two excellent solo albums rooted in the first principles of songwriting and country music, but which have sufficiently different musical identities and approaches as to make it unclear as to where she might head next. Eno Axis ends with a wonderfully transformative and shimmering interpretation of Led Zeppelin’s Houses Of The Holy (its arpeggiated 6/8 feel hinting at countless ’50s and ’60s R&B songs and R.E.M.’s Strange Currencies), a further indication that this is an artist who can remodel contemporary music’s rich history into her own compelling shapes.