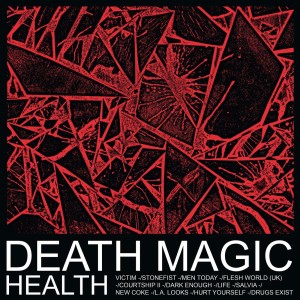 With a band like notorious Californian noise mongers HEALTH, the eternal question remains; just how far do you push yourself and your audience? Do you seek to plunge deeper into a dark abyss or do you seek out that fleeting sliver of light and explore new possibilities? HEALTH successfully manage to do the latter on their most accessible release yet, third album Death Magic.

Death Magic is the sound of HEALTH opening up slightly and allowing the pop melodies and hooks that lurked in the depths of their music to the surface. There’s a commendable degree of risk taking here as a band who have built up and commanded a fearsome reputation for making dark and relentlessly uncompromising music begin to take tentative steps to transform into a genuinely accessible mainstream alternative rock band.

The first signs of the band’s subtle transformation can be heard on Stonefirst, a grinding industrial electro pulse strikingly illuminated by some pure and plaintive vocals by singer Jacob Duzsik. The foregrounded clarity of the voice gives the track a distinct pop sensibility that was only ever merely hinted at amidst the sonic chaos of HEALTH’s previous work. HEALTH’s take on pop though is dark hearted and brooding; think of a band like Depeche Mode in all their electro goth splendour. While the music and melody is purer, the band’s doomy nature comes out in the bleak lyrics as Duzsik ominously intones: “You’re never going to feel the same.” Perhaps this is a warning for the band’s fans ahead of an album of transforming contrasts. Still, Dukzik reassuringly comforts us that we can still wallow in bleak misery together: “We both know loves not in our hearts.”

There’s a pattern that swiftly develops on Death Magic that sees HEALTH almost toying with the listener by lurching between short, terrifying blasts of piercing, blood curdling noise and portentous rumbling drums on Men Today, a track that bears most likeness to their earlier work. Here they reveal themselves to be a band adept at a kind of controlled chaos, showing that there are far more strings to their bow than previously assumed.

The stark contrasts continue with the thrilling bastardized electronic hammer horror house music of Flesh World (UK) that is juxtaposed with a super pop vocal and hook. The echoes of subversive electronic pop acts continue on the more restrained Dark Enough that resembles a gloomier take on the Pet Shop Boys. Without doubt, the most striking moment though is a track that could genuinely be a solid-gold hit single in a parallel pop world. Life is the kind of graceful, soaring ballad that many arena rock acts would kill to have. Simple and pure, it features a clarity and sweetness to it that utterly enthrals. The lyrical message of “Life is strange, we die and we don’t know why” is reminiscent of Flaming Lips’ equally transcendent Do You Realize? It’s a stunning moment that by all rights should become the song for HEALTH.

Following a supreme high like that would be difficult for any band and an inevitable lull follows despite the slinky, shiny grooves of LA Looks, the music – while not being as striking as the first half of the record – remains compelling. Perhaps the greatest triumph of Death Magic is HEALTH’s mastery of dynamics and atmosphere, which allows them to effortlessly traverse between sounds and styles in a way that they have never managed before.

Previously, HEALTH were seen as a truly outsider, slightly scary cult proposition. With Death Magic the band have skilfully shown that they could feasibly ascend to the same level as other global stadium electro rock behemoths while retaining their own unique identity. A thrilling prospect.