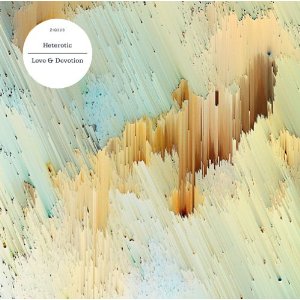 Occasionally recordings come along that challenge musical boundaries and demand attention, defying specific genre categorisation and sounding like little else in even the largest of music collections. Admittedly these moments are few and far between, with the market swamped with ‘normality’ as so many artists lean towards commercial success rather than experimentation and expression of their own inner selves. When something out of the ordinary does come along, intense listening is the only way to appreciate the new. Heterotic’s album Love & Devotion is one such offering.

Heterotic consist of Mike Paradinas, head honcho of the Planet Mu electronic record label and veteran of both electronica and house (aka µ-Ziq), his partner Lara Rix-Martin, and also featuring psychedelic folk artist Nick Talbot, better known as Gravenhurst. This wide-ranging cocktail of ingredients conjures up an interesting concoction of styles and sounds, making Love & Devotion one of the most intriguing releases of recent months.

There are clear references to all of these influences at various stages, with the output forming an overwhelmingly blissful and chilled out vibe. Bliss aptly opens the album with a distinct nod to early ’80s electro-synth pop with its wispy layers punctuated by echoey vocal textures and a Technique-era New Order bassline from when the electronic legends were dabbling in acid house. There are elements of drum and bass as well as ambient house, all sounding rather new, sensual and exciting – given the fact that the album was allegedly conceived in the bedroom, this is fitting.

Blue Lights is the first track to feature Gravenhurst, and the addition of Talbot’s soft vocal seems the perfect accompaniment for the synth-laden pop, driven along by a pulsing bass beat and piano lifted from the house scene. Musically at least, another ’80s/’90s act is recalled – Beloved, although at a more serene and sublime level.

The pace and ensuing mood drops with Wartime. Talbot’s vocals are barely above a whisper, and appear to describe a sensual bedroom encounter, with the lights down low, which just happens to be the perfect place to listen to this beautifully melancholic romanticism.

More ’80s sounding synths adorn the interestingly titled Robo Corp. It’s all futuristic and post-apocalypse sounding, almost depicting a vision of automaton life assessing the victory of machine over man across a barren war torn landscape of destruction and annihilation. Devotion picks the tempo up once more, with another continuous piano riff marrying with atmospheric synths and Talbot’s “may the circle be unbroken” swirling around, adding psychedelic overtones to the heady mix.

Knell contains saturated synths and a poppy Casio keyboard sound reminiscent of an early computer game, with more Sumner influences in the shape of an Electronic sounding piano line; this instrumental also benefits from spidery guitar and contemporary drums. The final track to feature Gravenhurst follows, another delicious moment with smoky, sublime vocals adding to the slowed down house vibe, which is best enjoyed at full volume in the dark to create an all too rare listening experience that is the perfect antidote to the stress-filled days of modern life.

Dramatic closer Fanfare does exactly what it says on the tin, with brassy synths declaring proceedings are at an end; the doom-ridden bass synth creating an almost sombre, dark and foreboding moment.

All in all this is quite unlike the vast majority of current day releases and, coming in at under 40 minutes, it holds attention throughout. The tracks featuring Gravenhurst elevate the interesting mix that all the ingested influences create into something otherwordly and fascinating, albeit with an early Human League feel. The past is somehow devoured, processed and regurgitated to form a completely refreshing and new substance; this is heavenly stuff that marks a departure from the modern sound. Could Heterotic possibly be the first glimpse into a new dawn for the future of music?