Hilary Duff – Breathe In. Breathe Out. 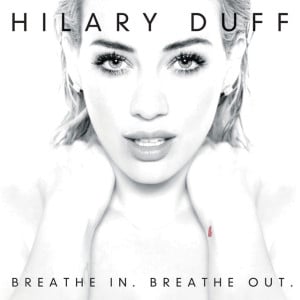 Hilary Duff released four albums in quick succession in the noughties and sold 15 million records in the process. Since her last studio album, 2007’s Dignity, there’s been a contractual-obligation greatest hits album, marriage, divorce, a child and a number of range-expanding acting roles. Her return last year to releasing music was tentative: two singles – Chasing The Sun and All About You – were released in 2014; neither made the US or UK Top 40.

Now, several months later, comes her fifth studio album, Breathe In. Breathe Out. Neither Chasing The Sun and All About You is included in the final tracklist. Duff instead wiped the slate clean and launched the album with its first track and official lead single, Sparks. With its whistled hook and huge, dancefloor-destroying synthesizers, Sparks would make the perfect Eurovision entry. (It’s not surprising to learn that Swedish people – namely Tove Lo and Christian “Bloodshy” Karlsson – were involved in the making of this song.)

Next up is My Kind, whose hiccupping hook and sashaying rhythm makes it sound like a lost Rihanna single. One In A Million is a breezy banger, while Confetti sounds like a hit-in-waiting, with its mammoth, sticky chorus, equally immense synth power chords and interpolation of Belinda Carlisle’s Heaven Is A Place On Earth. The album’s strong opening streak continues with the title track, which nails the pensive verse/uplifting chorus structure that served Taylor Swift so well on 1989.

What these opening five tracks lack in originality, they more than make up for in terms of precision-engineered hooks, breakdowns and riffs. However, it soon becomes clear that Breathe In. Breathe Out. is more frontloaded than a washing machine. The album’s quality control falls off a cliff with the arrival of track six, Lies. Once one gets past the pat, AA/BB rhyming schemes, the listener is likely to experience a strong sense of déjà vu, as the chord progression strongly echoes that of the song just four tracks earlier (My Kind).

Things get worse with Arms Around A Memory, whose hyperactive keyboards sound like they’re searching desperately for a melody that is never located. Stay In Love combines clichéd lyrics about “holding on just for the weekend” with equally clichéd EDM slush. Brave Heart and Tattoo (the latter boasting an Ed Sheeran writing credit) are beige non-events. The album reaches its nadir with Picture This, where another whistled hook only serves to remind the listener of the other, better track on the album featuring a whistled hook. The closing track, a jaunty duet with actor/singer Kendall Schmidt called Night Like This, fares slightly better, but by then the damage has already been done.

Breathe In. Breathe Out. is, effectively, a very good EP with a swollen appendix of filler attached to it. Duff’s musical career might not be able to regain its earlier momentum but, if radio stations pick up on one of its highlights (especially Sparks, My Kind or Confetti), then she might yet enjoy a mini-comeback.