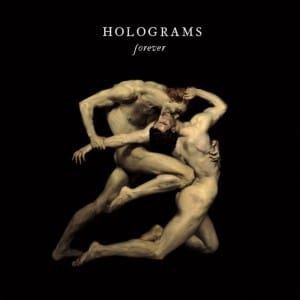 The highly rated eponymous debut album from Holograms introduced the Swedish post-punkers to a far wider audience with its sound, one that attempts to recreate music being played in a church. Whilst the term post-punk is lazily attributed to many artists these days, it is well suited to Holograms, with most obvious comparisons being to The Cure in their early days.

Despite that well received debut and ensuing worldwide tour, the boys have now returned home (Farsta, a small suburb of Stockholm); the moderate success doesn’t seem to have changed them from small town boys, with the Spetze brothers (Anton – vocals/guitar and Filip – keyboards) still residing at the family home. The quartet is completed by singer/bassist Andreas Lagerström and Anton Strandberg (drums) with the former sounding somewhat like a young Robert Smith.

Opening to the sound of industrial clanging, A Sacred State bursts into being with manic, racing guitars and heavy cymbal clattering to create something along the lines of Siouxsie & The Banshees. It’s a strong start to the collection with Lagerström’s vocals sounding monotone and Ian Curtis like at times, but the guitaring is the main driving force of the track, a particularly impressive instrumental section carrying it to its conclusion.

Second track Flesh And Bone is the first close comparison to The Cure during its opening bars, the guitar very similar in style. Vocals in the chorus sound like something lying between Killing Joke and The Skids; cheesy synths are also a predominant ingredient in the mix.

Fast, trashy, punky guitars open Meditations with the crashing cymbals again being a vital element to the overall sound in the (mainly) one-worded chorus of “destruction” – all very late ’70s/early ’80s once more. Ättestupa – a mythical place in Nordic history where elderly people are said to have thrown themselves to their death – opens with an eery, atmospheric feel and angular guitar. The repeated line of “I’m so tired” sums up the feeling that these elderly citizens were probably enduring before they met their fate – but the track isn’t particularly strong, sounding, well… tired.

More up tempo tracks follow. Luminous possesses a more evident bassline to accompany the now expected racing guitars. Just as things could be considered to be becoming a little samey, Rush then enters the fray and although there are clear similarities to everything that has gone before, the synths are given a turn at the forefront of the mix at various stages to create something slightly different.

The slower paced Wolves relies heavily on a thundering drum pattern and harmonised vocals as things become very goth sounding. The chorus, unusually, is merely instrumental, leading into some effects-laden guitar bursts and riffing with accompanying wavy, one note high pitched synth line. The racing guitars of Laughter Breaks The Silence sound akin to early Editors, producing one of the album highlights in the process. The disjointed song slows down for its chorus but then picks up again for the climax in fine style with the repeated line of “let laughter break the silence”.

A Blaze On The Hillside follows the same formula as its predecessor with the rampant, breakneck guitars given a much needed break for another pace-switching chorus before returning to excitingly take the track forward again. Lay Us Down then concludes the album in less vigorous fashion, the key elements to the song now being punchy electric guitar and tribal drumming played at a slower pace, the song embracing a decent synth-led mid-section before its conclusion.

Forever is a decent offering from a young band still developing their music and songwriting capabilities. With many similar post-punk revivalists on the scene, there may not be as big a clambering for the raw, edgy sound of Holograms; Savages already walk a similar path and the much bigger sounding anthems of White Lies will be preferred by those that prefer the more polished take on post-punk. That said, Holograms bear the markings of a band that could become a fine addition to the genre.