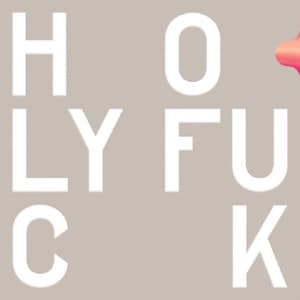 It’s been nearly 10 years since Holy Fuck appeared two drummers in tow and set about making a ramshackle but highly effective low-tech mash of rock and danceable electronica. Whilst not the first band to explore this territory, it is fair to say that Holy Fuck’s template and approach has been appropriated since 2007, and the fact that it’s been six years since Latin, their last album, has perhaps meant that their influence is not as widely credited as it should be.

It may have been a while since their last album, but Congrats finds the band on such fine form that it’s hard to believe they’ve been absent for an extended period. It would be tempting to suggest that they’re picking up where they left off, but Congrats is a different and more varied beast than its predecessors. Somehow Holy Fuck have gained a sense of momentum despite their apparent stasis in recent years and in addition their emotional palette has expanded too. Congrats is most certainly an album given to emotional swings, it is mean and moody one moment and ridiculously blissed out the next. If not handled carefully, such sudden changes can be jarring and uncomfortable, but Holy Fuck have found a way to make everything hang together neatly.

Opening with Chimes Broken, they head straight into a bad tempered club stomper. Cavernous drums thunder, atmospherics hiss like serpentine steam, and at the heart of it all there’s an unerring will to dance in the face of Armageddon. They follow this darkened floor filler with Tom Tom, a disjointed stomp , that sounds as if it is one more electrical fault away from grinding to a halt altogether. As regimented and forceful as the drums are, there’s a similar sense of detachment to that which permeates Gary Numan’s earlier work.

Yet for all the distorted vocals and terrifying undertones Holy Fuck are still programmed to create dance tunes, Tom Tom might suggest that their circuits are frying whilst doing so, but the end result is still perfect. House Of Glass is a little like watching a Muhammad Ali fight; there are neat shuffles, an almost groovy swagger and then several punches that land from apparently out of nowhere. Just as things settle down and a groove is established, another volley of shots hit home, as Holy Fuck lay down their punch drunk funk and start to showboat a little.

The flipside to this slightly dark streak that permeates the album with its huge drum pulses and malfunctioning circuitry, is the gentle subtlety at work. Shivering for example is an almost glacial piece of electro-pop, listen closely and you can hear the arctic winds rushing through the undulating Carpenter-esque synth lines. Neon Dad meanwhile ploughs a similar furrow to that of Foals circa Total Life Forever. Elegant and introspective in mood, it never seeks to unsettle which serves as the perfect antidote to the darker ambience that runs through many of the songs here.

Sitting at the end of the album is Acidic which throws caution to the wind and dispatches any notions of violence, darkness, or elegance for that matter. Instead, it submits to the euphoria to be found in dancing like a maniac. The result finds Michael Jackson’s Billie Jean in a tiny nightclub at 3am, eyes like pissholes in the snow, dripping in sweat and frugging furiously to Dr Feelgood’s Roxette. It is, in other words a finely crafted, feral dance tune that only Holy Fuck could really make. Hopefully there won’t be a six year wait for more.