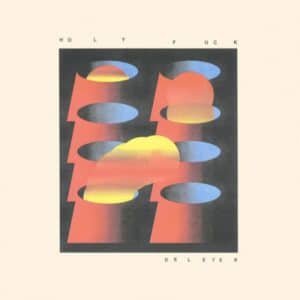 Four years since their previous record Congrats, Holy Fuck are back with another record of distorted, punky electronica. On Deleter the Toronto outfit are joined by Pond’s Nick Allbrook, Liars’ Angus Andrew and Hot Chip’s Alexis Taylor, the latter appearing on lead single Luxe, and some of the other tracks also feature heavily processed lyrics from the band themselves.

Luxe is also the opening track, arpeggiated synth bloops and ticking hi-hats underpinning Taylor’s plaintive vocals (“I’d like to scrap all of this / and start over again”) before elements start building and swirling into a climactic finish. The pacing is exquisite, and the sound design borrows from house music while being completely unbeholden to the broader style, which makes for a fascinating tune.

While Deleter is consistently noisy and overdriven, these descriptors belie a lot of sonic variation between songs. Moment brings back memories of vintage DFA with its driving beat and wicked guitar riff, glitchy sounds coming together to form a ramshackle groove that’s instantly infectious, while Endless fuses a grand and mystical chord sequence with vocal production that screams ’60s psychedelia.

Near Mint finds the band in a relatively ponderous mood, synths and guitars interweaving in a manner similar to Brian Eno’s pre-ambient material, only to be kicked out of it by the aggressive No Error. The drums are punchy, the bass is throbbing through layers of compression, the vocals are squashed so as to be completely unrecognisable, the guitar solo wanders in and out of key, and it’s a brilliant tune for all of these things.

The record is exhilarating, and not just because of how many sounds are cranked up to 11. The band have assembled a great selection of tunes that showcase a wide variety of styles, and Deleter is highly recommended for those on the intersection between electronica and rock.