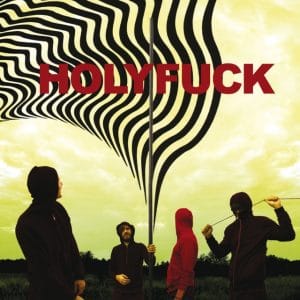 Holy Fuck. Holy Fuck! Holy Fuck. Does it offend you, yeah? Of course it doesn’t. And surely even the Pope would forgive a bout of sniggering at the juvenile joie de vivre in saying HOLY. FUCK. Holy Fuck are Canadian. Apparently, people in Canada say “HOLY FUCK!” like Londoners say “Sorry”. Londoners need to wash their holy fucking mouths out.

Toronto settlers Holy Fuck played on this tiny island’s shores in a pub in Brighton back in 2006. Everyone who witnessed their set at the back of the Pav Tav marvelled at how electronic-sounding music could be produced sans computers, as if by ad libbing between a pile of cheap keyboards, pedals and gizmos, with just a rhythm section for company. Word of mouth began to build ahead of the four-piece’s debut UK release. And then, holy fuck. They only went and lost a whole heap of their material when their holy fucking hard drive failed.

Fast forward over a year, during which numerous Stateside tours with the likes of !!! have come and gone, and the band have unleashed a recording that lives up to the hype surrounding their live shows. Simply entitled LP, the record was assembled from a range of one-off recording sessions. The frenetic opener Super Inuit was recorded live at a !!! support show. Elsewhere are out-takes from radio sessions. Everything is played ‘as live’ so none of the energy is lost. It makes for a record that is just about as compulsive as seeing the band up close.

This is music to move to. Throughout, Casios died for our collective aural pleasure. And no wonder !!! and Trans Am are fans – they occupy similar spaces. Not that it’s music to dance to, particularly – listen closely enough and traces of Can be discerned – but Holy Fuck’s music comes from their own place.

Super Inuit’s thundering introduction aside, there’s an unending supply of delights to enjoy. Lovely Allen is a gloriously upbeat piece with soupy drums and maxed out keyboard parts. Milkshake is an edgier affair (and, for the record, sounds nothing like the Kelis track of the same name), playing like the soundtrack to a noirish video game set in the deepest denizens of a dodgy neighbourhood. Modified vocal howls offset the sharp synth sounds and give it an organic tinge common to much of what Holy Fuck do.

Safari and The Pulse are the really big numbers. On the former, what starts like the noise made by a Fisher Price toy gets looped, fed back, joined by a beat that’s just short of tribal and goes for broke. On The Pulse, a keyboard’s argeggiator is set in motion and then the oscillation is fiddled with before layer after layer of coccoon-like ambience is wrapped around it. At any moment, either of these tracks sound like they could fall flat on their faces. Instead they flail about with gay abandon.

What next for Holy Fuck then? With the proceeds of LP it is hoped they sort out system backups so the next record is not so long in the making, for the contents of this one add up to vital stuff. Meanwhile, while we await a follow-up, somewhere a swear box needs emptying…