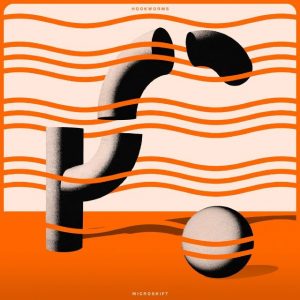 The title of Hookworms’ third album is nothing if not misleading. A microshift would suggest that very little has changed since their last album, but the reality is quite different. The years between The Hum and this latest release have been filled with trials and tribulations, and change often follows such tumultuous times.

For the three years since The Hum have, for the band, not been particularly fortuitous. Their home studio was flooded, which nearly bought the outfit to its knees, and there have been issues concerning death and mental and physical health too. It wouldn’t have been surprising to find them retreating into darkness and creating an album of pure melancholy. Yet whilst Microshift deals with their problems, the band have kept things relatively light and begun to head in a completely different direction.

Anyone familiar with their previous work will know that Hookworms is a band capable of pummelling their audience through relentless repetition, taking them on a transcendental journey. Their live shows can make even the staunchest non-mover finally give in and embrace the waves of noise. Matthew Johnson’s vocals were often swamped in reverb and delay, rendering him undecipherable as the band cooked up a swirling maelstrom of guitar chaos, underpinned by a forceful rhythm section. This time around however, they have tidied things up considerably. The psychedelic jams have all but gone and in their place we find a set of stripped back songs that embrace poptones and electro influences.

Opening track Negative Space wastes no time in showcasing this new dawn for the band. It’s a coming together of a snatched electro motif, gentle keyboards, a guitar lick half inched from Pink Floyd and a vocal line that finds MJ no longer hiding in obscuring clouds of effects but showcasing his considerable talents. The commitment to finding epiphany through music remains, but now, rather than soundtracking shamanic rituals, Hookworms have taken it to the dancefloor. Whilst there is melancholy in the lyrics (“I still see you every time I’m down”), there is a determination and an undeniable positivity, too.

Static Resistance harks back to the Hookworms of old in its embrace of motorik rhythms and the band’s ability to switch from subdued to explosive in the blink of an eye, but the new-found clarity means that they get to the pay off so much quicker. Static Resistance might hark back a little, but a more delicate side to the band coming to the fore now too and The Softer Season is a wash of hazy synths bubbling beneath a truly beautiful vocal from MJ that addresses a relationship breakdown. That it has taken until the third album for him to step out from the shadows vocally is something of a mystery, but thankfully Hookworms is making the most of them now. Opener, a track half way through the album, slowly emerges from the emotional turmoil, its soft-focus synths causing rays of hope to emanate from the heart of the record. It’s as if the sun has appeared from behind the clouds and suddenly Microshift feels positively jaunty. In contrast, Reunion relaxes things a little and heads into chillout territory with its twinkling keyboards and soulful sax interjections, but fans of the old-style Hookworms need not panic, there are moments when the band starts to let loose a little.

Boxing Day is perhaps the most aggressive song here, which is not particularly surprising considering that it takes on the events of the flooding that nearly finished the band and their studio. With squalling discordant interjections lurching out from the robotic surroundings, it sounds like Gary Numan being assaulted by Captain Beefheart and for once, the band sounds angry with the hand they’ve been dealt over the last few years. Closing the album is Shortcomings which starts with a taut bassline that instantly calls to mind Joy Division, and an icy chill begins to descend as MJ sings “this party’s nearly over, lately love seems cynical”. But just before things start to get too bleak, the band clicks through the gears and things start thaw. The line “Hold out, you gotta hold out, it’ll come” perhaps sums up not just this song but Microshift as a whole. From their lowest ebb, Hookworms have changed direction, and appear to recognise that just as all good things must come to an end, so too must all bad things. Microshift finds Hookworms drawing a line under their history and taking their first step on a new adventure. They’ve not put a foot wrong yet.