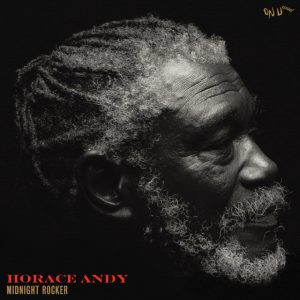 Though it may always be Horace Andy’s most high-profile musical turn, Massive Attack’s One Love was oddly uncanny, laidback but clinical in its instrumentation while Andy’s delivery brought the human touch. On Midnight Rocker, however, the production creates a warm reggae-infused bed and lays the groundwork for a remarkable late-career resurgence.

The songs on this well-paced, concise record mostly revolve around a simple theme, whether it be the tricky role of money in life on Materialist, or the case for a healthy dose of scepticism on Careful. Referring back to his aforementioned role in British trip-hop, there is also a cover of Safe From Harm which replaces the spooky pads of the original with dub echo and more acidic synth lines, a resounding success.

This is not to imply that Midnight Rocker is all simplicity and face value – Try Love is ostensibly about the value of positivity but comes with melancholic air, its lachrymose string section and minor key hinting at the negativity in the world that one must overcome. The opposite manoeuvre is carried off on the album’s opening track This Must Be Hell, whose bleak hook gives way to musings on love’s power and preciousness.

Watch Over Them is irresistibly sunny, featuring a I-ii sequence as familiar and welcome as comfort food and Andy in elder statesman mode (“show them the way Jah Jah, steer them right / from foolishness, never leave their side / day by day, night by night / steer them clear, Jah Jah be their guide”). Meanwhile Mr Bassie employs copious effects to its saxophone-driven middle section, riding the groove effortlessly as the bassline rings out.

Horace Andy is clearly an artist not content to rest on his laurels, and with this album he strengthens his position as a bona fide reggae legend.