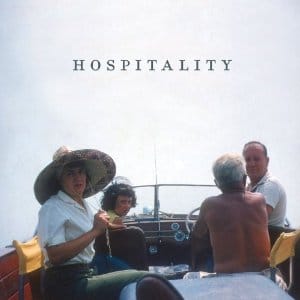 Hospitality’s debut album has arrived on these shores having surfed across the Atlantic on waves of praise from the States. It’s easy to easy why this New York trio have been clasped to Uncle Sam’s chest, for this is an immediately likeable disc with short and spiky tracks that contain just the right level of idiosyncrasy to stand out from their peers.

There’s certainly a high level of playability in this album. Clocking in at just over half an hour and with 10 no-nonsense tracks, this is best placed on your playlist/shelf somewhere near the likes of Best Coast and Summer Camp. Lead singer Amber Papini sounds like a parallel universe version of fellow New Yorker Regina Spektor and there’s clearly more than a hint of Spektor in the unconventional nature of the lyrics too.

Eighth Avenue is an odd calling card to kick off the album and its ever-changing mood goes a long way to set out the band’s wonky credentials. Friends Of Friends is another piece of poppy oddness but teeters on just the right side of kooky, and Betty Wang is a curious mix of The Lemonheads with elements of Stereolab hanging in the background. The Right Profession is an undeniable toe-tapper and cruelly too short at just under two minutes. However, the penultimate track Liberal Arts is the clear highlight with its playful bemoaning the consequences of having a BA in English Literature.

While the perky fun is good to listen to, there’s not much in the way of memorable themes. This is not to say that the album doesn’t stand up to repeated plays, it’s just that the unpredictability doesn’t make for much in the way of earworms. Also, the spunky and wayward nature of the first half of the album becomes too settled in terms of energy and pace towards the conclusion. This means that the second half of the album is more of a grower than an immediate hit. That aside, this has all the hallmarks of being one of those LPs you reach for instinctively when you can’t decide what kind of mood you’re in.

The majority of this disc is a bright and breezy brew of kooky college pop. As debut albums go this is enjoyable stuff containing a lot of promise for the future and enough clout to make them sure-fire must-sees on the live circuit. Fans of airy independent music are sure to welcome this disc with open arms, but a few minor quibbles mean that the rest of us might want to hold back for more until the red carpet is rolled out.