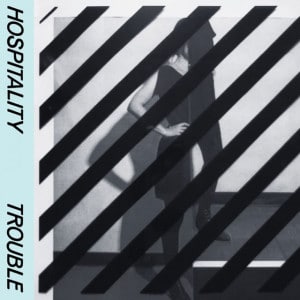 Nightingale, the opening cut on NYC band Hospitality’s second record, serves as both a statement of intent and an introduction to Hospitality’s patchwork sound. It packs a rollicking, rolling Crazy Horse riff, string-draped dramatics and leader Amber Papini’s vocal charm offensive. It’s Papini who takes much of the critical plaudits for her band’s exciting sound, and rightly so – she is the main attraction here, and is allowed to showcase her considerable songwriting and vocal abilities in equal measure.

Their first, self-titled, record was dropped in 2012 to unhelpful Camera Obscura comparisons and reams of hyperbole. Hospitality’s sound isn’t a new thing, see, and their records are both patchwork collages, taking in a range of styles – twee, slacker and college are three of the most commonly tagged signifiers attached to their crate-digging cute- pop.

Hospitality are what used to be called a power trio: Papini on guitar and vocals is joined by partner Nathan Michel on percussion and Brian Betancourt on bass. It’s Papini’s striking voice that turns the opener into a hummable highlight, and second track Going Out finds her double-tracked vocal set to ‘delicate’. Her breathy voice and more direct, angsty mode are both on show. Going Out is slinky, rhythm-driven pop-rock that begins with a Tom Petty guitar strut and evolves into a tight, head-nodding number similar to what Tegan and Sara got up to on The Con.

I Miss Your Bones is a twitchy pop anthem that borrows from the Quin sisters’ playbook, with a driving beat and tightly wound riff offsetting teen-diary lyrics. Inauguration follows, a minimal, dreamy pop track reduced to a pulsing rhythm and fizzing guitar. Rockets and Jets could be an early The Cure tune, with glistening chord slashes and throbbing bass line. At around two and a half minutes in, it becomes the highlight of the record. It’s this darker, wallowing-in-despair side to Hospitality that many find appealing – the same goes for the darker tones used on the entire length of Warpaint’s superb new album.

The downbeat mood continues to set in over the second half of the LP – culminating in the dreary lullaby Call Me After. It never gets above a yawning, spaced out pace, and Papini’s mild tones and gentle guitar close the record out in nap-mode. The darkest hue, sonically, is found on Sullivan. By far the barest track on the album, it borrows from both slow- and sad-core to great effect, its sleepy feel and synth washes turning it into a spiritual twin of Jeff Buckley’s Dream Brother. Sunship, which appears later in the record, reprises this vibe.

It’s Not Serious is retro-rock in the classic sense, a simple pop melody with rudimentary beat and ringing guitar hook layered underneath piano chords. Last Words finds Hospitality employing a different slant on pop radio a la the synthetic ’80s sounds of Heart or Fleetwood Mac. Papini’s solo is a gem: an off-kilter jam on a cheap-sounding guitar fits on here, on a track that has been sorely overlooked for inclusion on a Grand Theft Auto game or Ryan Gosling movie.

Hospitality have made a record full of hooks, memorable moments and emotion-fuelled pop. It hangs together well and the songs are decently written. But most listeners need something more, an undeniable quality that is completely unique to a band. A Unique Selling Point, if you will. Hospitality have not found theirs yet.