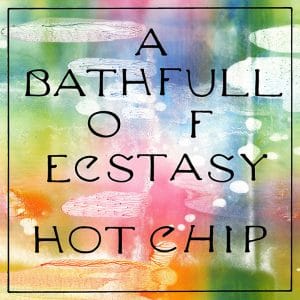 Four years since their previous album Why Make Sense?, Joe Goddard, Alexis Taylor and the Hot Chip gang are back with a record that serves distinctive production and top grade sophisti-pop songcraft in equal measure.

On A Bath Full Of Ecstasy the band have worked with external producers for the first time, in the forms of Philippe Zdar and Rodaidh McDonald, and the tracks are generally longer, favouring the odyssean structures of the 12” over the tightly measured radio version, and the balance of this record leans more towards up-tempo numbers.

Spell impresses early on, with its vocoded hook and driving beat: it opens with a feeling of restriction, all muted chords and taut groove, and the hook-line’s repetition works like a sort of incantation to bring in an explosive, euphoric chorus. They return to a notion of euphoria with closing track No God, its joyous piano stabs and a subtly anthemic atmosphere calling to mind Andrew Weatherall-era Primal Scream.

For the more nerdy electronic music fan, Echo has the most out-there sound design of the album, as various kinds of – you guessed it – echo bounce around the space-funk groove and give the track a charmingly wacky feel. Meanwhile the most poppy moment comes with Why Does My Mind, a melody that feels warmly familiar, a shiny cavalcade of synths – and even a key change.

Hungry Child is the centrepiece of the record, a slow-building number where moody, introspective verses contrast with a club-ready beat. It’s the most commercial example of dance music that Hot Chip have penned for a while, and tracks like this provide much-appreciated vitality where their last record Why Make Sense? occasionally felt a tad inert.

A Bath Full Of Ecstasy might be a somewhat eccentric name, but it ultimately does sum the album up rather well (assuming it means the abstract emotion rather than literal pills stacked up in a bathtub): a lush, adventurous experience, immersive and refreshing.