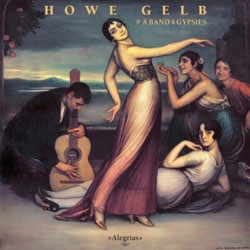 Given how influential a figure he has been, it’s hard to understand why Howe Gelb has never quite received his dues as a songwriter. For a start, the rhythm section from his band Giant Sand went on to become Calexico, and his own relaxed parlance was at least contemporaneous with similar deliveries from the likes of Bill Callahan, Will Oldham and Kurt Wagner.

Still, of all these idiosyncratic singer-songwriters, Gelb may well be the most obtuse. Melodies are often downplayed in his songs in favour of a particular atmosphere or narrative drive. He has also been mind-bogglingly prolific. It’s difficult to know where to launch in to his output. Perhaps as a result, he’s never quite made his way out of the cult status box.

Alegrias, although a brilliantly recorded and quietly engaging album, is probably unlikely to change all this. It is the result of an intermittent seven year collaboration with the flamenco ensemble Band Of Gypsies (a genuine gypsy group from Cordoba), although it is so effortlessly coherent that it could easily have been made in the space of a week. The set draws from various stages of Gelb’s career, including reworked solo and Giant Sand songs, as well as some material written specifically for this project. As a whole, it is a superlative exhibition of Gelb’s storytelling talents.

Gelb’s Arizona desert stylings blend remarkably well with the flamenco rhythms provided by Band Of Gypsies. It is one of those meetings of minds that highlights the common ground between music spread over a wide geographical distance. Perhaps Uneven Light Of Day is the best example of how the various elements come together – it veers unexpectedly but effectively between flamenco driven sections and sudden flashes of excoriating guitar. It is strongly reminiscent of the sound captured by Broken Social Scene‘s Andrew Whiteman in his Apostle Of Hustle project. It is a beautifully atmospheric collection, full of dust and dreams.

Even the song titles are wonderfully evocative. Broken Bird and The Ghost River suggests that Gelb has had more than a coincidental influence on the lexicon of Iron & Wine, with its sense of geography, nature and place. Even more poetic is Where The Wind Turns The Skin to Leather, one of the album’s evocative and distinctive highlights. As a lyricist, Gelb is daring and unrestrained. This makes for some extraordinary stories, even if his language can be a little overcooked at times.

Whilst this collaboration certainly retains many of Gelb’s defining characteristics, there are surprises too. There’s the loose-limbed acoustic funk of Saint Conformity, with its peculiarly abrupt ending. Also unexpected and impressive is the way Gelb reworks early Giant Sand material to fit the sound of this collaboration. (There Were) Always Horses Coming was dark and oppressive in its original version, punctuated by bursts of heavily distorted guitar. Here, it assumes a dusty border music quality, although it loses little of its sense of menace and threat.

In Gelb’s disparate and confounding catalogue, Alegrias sits comfortably alongside ‘Sno Angel Like You, his wonderful recording with a gospel choir from 2006. In fact, since Gelb started working mainly as a solo artist, these collaborations have arguably been his strongest, most convincing works. His collaborators have provided challenging but appropriate accompaniments for his florid musings.