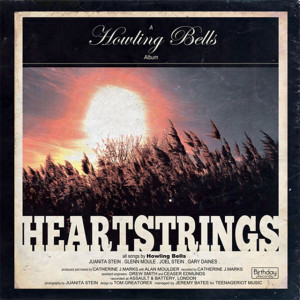 You would be forgiven for thinking that we’d heard the last of Howling Bells. Eight years ago, the Australians released one of the best albums of the year with their self-titled debut, and it seems their career since then has been defined by a struggle to follow it. Their second album Radio Wars was a crushing disappointment, while 2011’s The Loudest Engine was so flat, many people were surprised to hear it had even been released.

Since The Loudest Engine, there’s been side projects (lead singer Juanita Stein formed Albert Albert with former Kaiser Chiefs member Nick Hodgson while her guitarist brother Joel has been recording under the name Glassmaps), line-up changes and splits from record labels, but no sign of any new music. Until now, that is – and from the very first note of Heartstrings’ opening track Paris, it’s clear that Howling Bells have undergone something of a rebirth.

The term ‘rebirth’ seems appropriate, not just because this is their first album since Juanita became a mother in 2012. Heartstrings is the follow-up that Radio Wars should have been, in which the Steins seem to have gone back to the drawing board to discover what made them great in the first place. And what makes them great is their songs – dusty, folk-blues Americana which sounds almost cinematic in places (indeed, even the album cover is designed as a movie poster).

Paris sounds like a statement of intent, right from the opening fiery guitar riff which introduces a melody that swoops and soars magnificently. Stein’s voice sounds terrific: brooding, passionate and longing, and when its followed by the powerful, frantic and incendiary noise of Possession, it’s impossible not to feel that this is a band re-energised after a few years away.

There are several moments that remind one of that debut album – the terrific Slowburn sounds both instantly familiar and irresistibly fresh and Tornado has a surf-guitar motif that almost fizzles with energy. Yet there’s also a resigned sadness lurking underneath, especially in Stein’s mournful vocals, which adds a level of maturity which serves the band well.

The stripped-back Paper Heart sounds especially poignant, being just Stein’s voice against a piano and some soft strings, while Your Love is positively heartbreaking, especially Stein’s delivery of a line like “I miss your sadness and broken heart, but most of all I miss your love”. Although there’s a tendency to repeat lyrics a little too much – as on the otherwise excellent Tornado – it’s easy to overlook when they sound this focused.

As great as much of Heartstrings is, there are a few issues with it. It’s rather front-loaded, as after the fiery opening half of the album, it peters out a bit towards the end with a few too many mid-paced ballads. Some, like the aforementioned Paper Heart, are impossibly pretty, but others, like the nondescript Euphoria or the title track which closes the album, are rather bland.

That is, in all honesty, a minor quibble though, as the majority of Heartstrings is the stirring return to form that much of us had hoped for each time Howling Bells released a new record. We’ve been waiting eight years for them to confirm that their debut album was no one-off. Now, we know that’s not the case.