by Michael Hubbard
published: 15 May 2006 in Album Reviews
Tweet 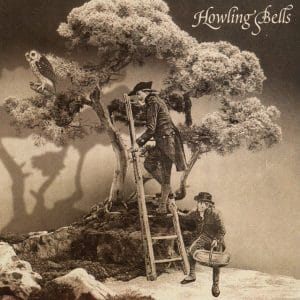 While the denizens of northern latitudes welcome summer’s overdue warm weather, strip to the waist and jump into the nearest expanse of water for a cavort, Down Under people are preparing for hibernation, for autumnal brown to colour their lives and for whiskey to characterise their long, dark evenings.

This can be the only explanation for Howling Bells‘ debut appearing in May. The Aussie four-piece, sometime inhabitors of Liverpool, have made a darkly evocative album in which guitars have rarely sounded so glorious. Their front woman is a gothic pixie called Juanita Stein, and her voice suggests she’s been listening to lots of PJ Harvey.

They share the cinematic, bottom-of-the-bottle atmosphere characteristic of their countryman Nick Cave, though their sound – produced by Ken Nelson – is one in which melody and musical imagery are of more importance than clever lyrics.

The Howling Bells vibe is smooth, shimmering, like a road movie in which the characters have never felt the need to work, there being too much world to see in a lifetime. Some of these tracks are obviously creatures of the night, while others – Low Happening, The Bell Hit – would grace a car stereo on an open road at any time of day.

There are tracks here that are bona fide classics. Blessed Night is an excuse for bringing back air guitar moves, Juanita’s distorted vocals competing with a sleazy bass and a euphoric pairing of cymbal and guitar riff. Setting Sun cries out for a superstar DJ to remix it for the Ibiza hordes, though even the talents of Paul Oakenfold or Paul van Dyk would struggle to improve it.

A Ballad For The Bleeding Hearts strays close to a burlesque vibe at its end, while In The Woods is an eerie piece that would grace the soundtrack of a 21st century update of Thelma & Louise and offers Joel Stein the chance to duet with Juanita.

This glorious, beautiful record of effortlessly starry noir makes one very clear statement. Howling Bells are fabulous, and this debut album is one of the strongest records of 2006 so far. Make them superstars.