Huey Lewis And The News – Soulsville 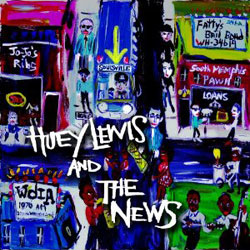 There are songs that define a moment; The Power Of Love by Huey Lewis And The News, amongst a decade of memorable melodies, appeared on the Back To The Future soundtrack and continues to whisk us back to the ’80s each time in consequence. Back then, while the San Francisco Bay Area band lingered somewhere between straightforward rock and radio pop, they concealed some hints of blues, most evident through Lewis’s raspy, bluesy voice. So instead of recycling the catchy tunes of his ’80s heydays, Lewis has gone back to his roots, delving straight into the Stax Records catalogue. Welcome to Soulsville.

On his first album since 2001’s Plan B, Lewis seeks inspiration by covering artists that inherently influenced him in his youth. Admitting during a recent interview that he is no longer a “spring chicken”, suggesting he is now of an age to be creatively-challenged, he picks the would-be safer option of a covers album. He’s got the voice, but just how exactly safe is it to take on some of the great classics of a legendary label?

Recorded at the historic Ardent Studios in Memphis, Lewis has gathered a solid collection of 14 tracks that pay homage to a groundbreaking sound and an important, albeit brief, moment in music history. He has avoided clich�s and thankfully gone for lesser-known gems instead of the predictable tunes that have been covered over and over.

He carries timeless tunes like Eddie Floyd‘s Never Found A Girl, Wilson Pickett‘s Don’t Fight It and Don’t Let The Green Grass Fool You, and Solomon Burke‘s Got To Get You Off My Mind in a reverent manner, careful not to desecrate them, and gingerly brings out his harp on the Joe Tex melody I Want To (Do Everything For You). The Staple Sisters‘ 1971 classic Respect Yourself and Rufus Thomas‘s Little Sally Walker manage to recreate the vibe of the originals. Perhaps one of the more surprising covers is that of Isaac Hayes‘ title track from the soundtrack of Shaft, a powerful social commentary about the plight of African-Americans. The album closes with a snazzy version of The Mar-Keys‘ Grab This Thing.

One of the worst things that can happen when covering a song is when the band tries too hard to match the original. The News provide a smooth reinterpretation yet don’t falter and fall into an unnecessary inventiveness that would only demean the songs. The rhythm section provides much of the soul throughout the record. John Pierce’s bass lines are impeccable, the drums roll with ease while the sax and horns give off a retro feel and capture the Memphis vibe.

Now that he’s got this out of his system, Huey Lewis may finally be inspired enough to work on new material before returning to Broadway, where he moonlighted in recent years in the musical Chicago.

Huey Lewis And The News MP3s or CDs

Huey Lewis And The News on Spotify