It Hugs Back – Slow Wave 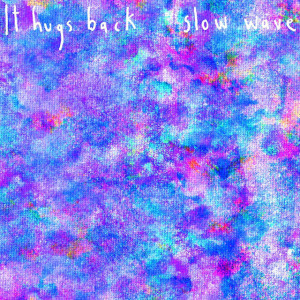 As they note in their biography, Kent quartet It Hugs Back have been together more than half their lives. This is their fourth album in nine years of existence, and while lead songwriter Matthew Simms has more recently been playing away with Wire they clearly have their hearts set on a long musical career.

The last album Recommended Record saw the embrace of joyous pop music, following in the tracks of a full on flirtation with Krautrock in 2012’s Laughing Party, where they stopped short of outright flattery by keeping the roots of the band’s harmonic and melodic approach. These releases have proved Simms to be a versatile songwriter, able to move between shorter vignettes, extended mood pieces and off-centre pop songs. So which direction does Slow Wave take?

All three, it turns out – for this is an assured blend of the bigger structures and a production that often approaches a dream state, so relaxed is its profile. This is no doubt due to the band’s predilection for phasers and old tape delays, but the likes of Slow Wave enjoy sumptuous textures and a broad, airy atmosphere. There is an expansive backdrop even for the more melancholy songs such as Goodbye, in keeping with the band’s first work but now adding strings in an increasingly confident approach.

Their attention to the sonic backdrop does not mar the fact there are some fine songs here, the band pulling gently but insistently at the heartstrings, even in the throes of the seven-minute opening discourse Goodbye. Here, Simms appears to be waving off a failed relationship. “Where did we go wrong?” he muses, sotto voce, before the music sweeps those thoughts into the middle distance.

Still Here, though, is the 10-minute jewel in the album’s crown. A blissful beauty, it builds beautifully before panning out out towards the end, the soft strings moulding some of the best harmonies the band have yet written.

The relaxed vibe of Slow Wave may be slightly overdone, for the horizontal late night vibe can become almost too soothing at times, lacking perhaps the drive songs in The Laughing Party more obviously had. Yet this record still provides firm evidence that It Hugs Back are worthy of their place as an increasingly treasured institution in English guitar pop, articulating their ideas through a beauty rarely glimpsed in the genre.

It Hugs Back MP3s or CDs

It Hugs Back on Spotify