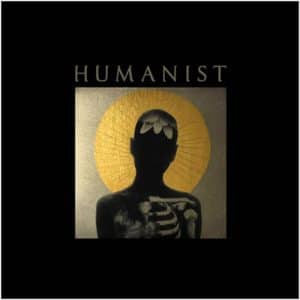 The project of Rob Marshall, Humanist is a dense and intense experience, which one could argue expertly reflects the general mood of the world today. If you’re going to examine such topics as death, mortality and the pointlessness of existence then it helps to have a fantastic voice to lead the charge. Whilst Marshall handles the musical and production aspects of Humanist, he has, rather fortunately, an incredible selection of guest vocalists on hand to complete his vision.

It might be becoming a little bit clichéd to have Mark Lanegan as a guest vocalist on your album these days. Everybody’s doing it, and with good reason; his instantly recognisable vocals not only make almost any song sound better, but they lend a sense of authority, authenticity and most importantly, soul. Lanegan’s appearance here is not that of a journeyman or hired hand however, for Marshall has worked with him before as a co-conspirator on Lanegan’s albums Gargoyle and Somebody’s Knocking. The pair has a considerable history, so it’s not as if getting him in for a few guest spots is entirely unexpected, nor is it a cynical attempt to give the album a boost by attracting the Lanegan faithful. He’s been chosen because he fits these songs perfectly.

After a brief scene setting introduction of noise (cavernous rumbles and what sounds like the thrum of fume spewing traffic), things get underway with the understated but darkened minimalism of Kingdom. Lanegan wastes no time in establishing the mood “I’m riding through the kingdom, ghost is riding by my side” he muses in that familiar gruff way, that sounds more and more like Johnny Cash with every release. Beast Of The Nation ups the ante somewhat with its thunderous bassline, guitar scree, and carefully constructed atmospherics. Lanegan finds himself on the train to nowhere, a place he’ll never leave. It seems clear that wherever he’s leaving in favour of nowhere isn’t exactly the kind of place you’d want to hang out either.

Lanegan crops up again later on Gospel, which finds him discussing his right to travel with the train conductor, although it’s never clear whether he’s still nowhere-bound. Such details quickly become irrelevant however as the song builds towards a squalling outpouring. As the music around him cries out with a frantic energy, Lanegan delivers an apparently effortless vocal that nonetheless tugs at your heartstrings relentlessly.

Whilst Lanegan’s presence on Humanist is the most regular, he’s joined by a host of other vocal talent that gives the album a wider scope and range. Interestingly, perhaps the best song on the album is not fronted by Lanegan, but by Depeche Mode‘s Dave Gahan. Shock Collar finds Gahan at the top of his game. Guitars soar and cry like circling birds, as Gahan conjures images of what might be battlefields, but could just as easily be a foretelling of environmental disaster. Its power is in its repetition, the need to begin again is clear, as is the fact that Gahan has never lied and is in possession of a halo (in this song at least). There’s something undeniably beautiful and emotive about Shock Collar, it never fails to hit hard, and it’s all down to an incredible and impassioned performance from Gahan.

Marshall is clearly adept at pulling extraordinary performances from his collaborators, because there’s not a false step or damp squib on the entire album. The darkened motorik hum of English Ghosts finds John Robb of The Membranes, digging beneath the pavements of London and growling about the rain and secrets before twisting his voice into a squeal reminiscent of a Coltrane solo. When The Lights Go Out features Ride‘s Mark Gardener and is perhaps unsurprisingly a fine and hazy slab of shoegaze.

Ring Of Truth with Carl Hancock Rux, is an almost ambient piece, crawling along with dark intent. It’s a beautifully delivered song, and it’s impossible not to hear elements of Davd Bowie‘s later work as it plays out. Mortal Eyes, Hancock Rux’s other contribution is similarly dark, coming across like a drawn out meditation on The Cure and The Sisters Of Mercy.

Ultimately, the whole album is a triumph of collaboration and should be seen as a celebration of the artistic vision of Rob Marshall. There’s not a misstep on a single track, and there’s a depth here that rewards repeated listens. It’s a bit early to be talking about albums of the year, but don’t be surprised to see Humanist making the lists come December.