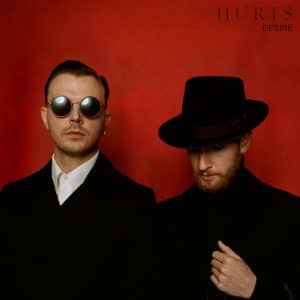 Manchester duo Hurts, consisting of Adam Anderson and Theo Hutchcraft, have always been rather intriguing. Like Everything Everything they can be difficult to place in the music landscape. Are they arty and different? Or are they mainstream’s go-to when they are looking give a little attention to an artist who is ‘arty and different’? If you are judging them solely on new record Desire, the latter more likely applies.

For this mixed bag of a fourth album ultimately disappoints. Hurts, initially known for atmospheric synthpop exemplified on debut single Wonderful Life, have a couple of very strong albums to their name in the shape of Happiness and Exile, released in 2010 and 2013 respectively. Things took a muddled turn when they released Surrender two years ago. It revealed an outfit in transition, leaving the things Hurts do very well and morphing into something rather more one dimensional. Unfortunately, the journey continues with Desire. There’s still some of their deep dark electronic brooding, but more often here you’ll find chipper fast paced chorus after chipper fast paced chorus.

There’s not long to wait for an example of this, with opener Beautiful Ones selling it for all its worth. Here is a feel-good song, the sort a winner of The X-Factor might sing. It is in no way edgy. To its credit, like much of the album, the song is well produced and has everything chucked at it. It is similar with Ready To Go, a track which feels a little like an offcut from Coldplay‘s cutting room floor. It is catchy enough to draw you in without throwing everything in your face, and it’s hard to get Hutchcraft’s yells of “when I die, yeah, you know I’ll be ready to go” out of your head.

Elsewhere, emotional depth is to be found in Something I Need To Know, which underlines that Desire’s stronger points come to the fore when Hurts explore subtlety, while Magnificent makes a fine whimsical love song which ably brings the album to a close.

It’s a credit to Hurts for stepping outside their comfort zone and aiming high, but the end product feels as though it was rather a struggle. Possibly to gain more exposure, they’ve made what they hope is a radio friendly record, but which all but obliterates that which won them fans in the first place. It’ll be painful, but at this point Hurts should go back to the drawing board. They’ve made good albums before, and can again.