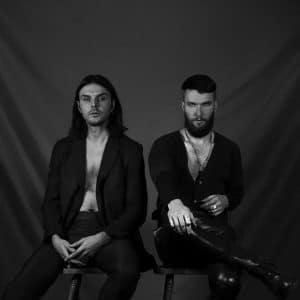 Faith finds Hurts on their fifth album in a decade, and they’re still intent on exploring ’80s influences. Their habit of throwing choice pop cuts into the mix alongside a slight dash of slightly depressed goth seasoning shows no sign of letting up, which should please those who want to know exactly what to expect.

One glance of the cover of Faith is enough to know exactly where Hurts are as a band in 2020. It’s black and white and echos the artwork of their first album, Happiness. These days they’re considerably more hairy, encapsulating a chiselled, bear-like look that’s somewhere between Depeche Mode‘s Dave Gahan and Superman II‘s Zod.

But in terms of emotional state, happiness appears to have deserted Theo Hutchcraft and Adam Anderson. The pair have struggled over the last few years, with Adamson in particular talking openly about his experience with depression and anxiety, whilst Hutchcraft has spoken about how he too had been pushed to breaking point whilst on tour. This album however appears to reach back to 2010 and attempts to reconnect with the Happiness that once flowed through the Hurts camp.

Musically, Hurts are in a fairly familiar space. Mixing pop with emotional turmoil and personal struggles is not a new approach, and when done well it’s a heady concoction. Of course it’s often easy to miss the more serious side of a band’s intent when they’re baring their soul over a banger of a tune, and to some degree that’s what happens with Faith. Opening track Voices could easily have found itself on a Justin Timberlake or George Michael album. Initially stripped back to the bare bones of finger snaps and a simple guitar lick, it opens up into a thunderous synth pop chorus. It’s easy to miss the idea of a cacophony of destructive voices echoing around Hutchcraft’s head simply because the song is a total earworm. He sounds like he’s intent on filling a dancefloor, rather than battling demons in the shadows.

There are moments when the rollercoster of the last few years is more easy to discern, such as on Fractured. A skeletal electropop nightmare, its glitches and claustrophobic feel call to mind Missy Elliot at her most confrontational, whilst giving Hurts a sonic canvas to explore what they’ve been dealing with. After whispering about everything that’s wrong with him during the verse, Hutchcraft finally states “I’m fractured, get your hands off me”, which leaves us in no doubt as to where his head has been recently. It’s when the pop sheen is dropped and they head in a twitchy, darker direction that Hurts are at their most effective.

Numb doffs its cap in the direction of early Nine Inch Nails. Revelling in detachment, it lurks in the darkness, twitching away and shedding anything that might be considered superfluous. It’s gloriously icy and sparse, with an ominous bass wobble. Hutchcraft might claim he “feels nothing at all” but Numb is, ironically, one of the most genuinely heartfelt moments on the album.

Liar has something of the In The Air era Phil Collins about it, there’s a brooding sense of malevolence bubbling under the synth lines, but rather than explode in a thunderous roll of drums, Hurts opt to let the whole thing simmer without ever really reaching a satisfactory crescendo. Darkest Hour meanwhile is the kind of song that U2 would kill for. It’s got a huge hook at the song’s climax and a bucket load of sincerity wrapped up nicely in the line “In your darkest hour, I will light the way, I will help you cope with the hardest day”. It has the potential to be 2020’s Firework.

There’s some real pop balladry at work on Faith. If TV talent shows are short on new tunes, for the “overwrought emotional song” spot, then Hurts have given them a few beauties. Redemption, All I Have To Give and Darkest Hour are all ripe for someone to give them the “can we be serious for a moment?” treatment. Hurts themselves get away with it, simply because they’ve written these songs, but it’s a fine line between real emotion and parody.

Despite this being an album that explores the troubled times Hurts has been through, it’s perhaps the fact that songs like Darkest Hour don’t hit the mark like they should anymore that tells us the most about the state of the world at the moment. It’s heartfelt, and written with a view to being supportive to those hearing those words who might need a positive voice in the darkness. Yet because it’s written in the style of an emotional pop song, it somehow lacks the emotional sincerity that it was clearly written with. This is not the fault of Hurts, but when the most painful songs ever written have been dressed up in pop-fluff, trotted out at teatime on a Saturday and then stripped of all their emotion, that’s when a real disconnect starts to happen. Hurts have drawn attention to it. Whether they meant to or not is another matter.